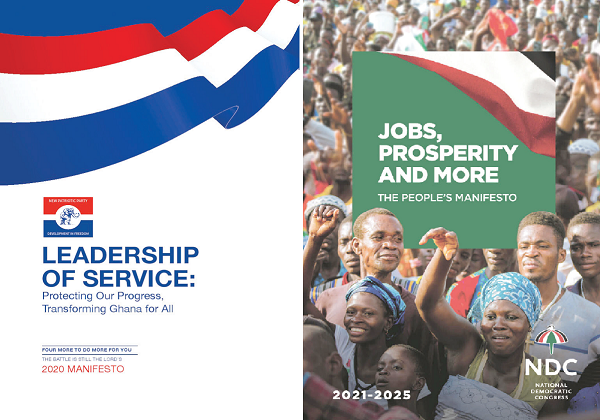 Public discourse on the need to make sanitary pads more accessible by reducing the cost and providing viable local production alternatives has received attention in the 2020 manifestos of the two main political parties, the New Patriotic Party (NPP) and the National Democratic Congress (NDC).

A research document titled, ‘The Citizen’s Manifesto on Social Protection Programmes and Policies,’ which provides public expectations of political parties ahead of the December 7 elections, indicates that menstruation among teenage girls is a major concern for many in deprived communities.

The two parties have made the issue of sanitary pads a campaign promise, with both parties indicating that they will provide an intervention in that regard, even though they differ on plans towards achieving their goal.

The NPP 2020 manifesto states that while supporting the private sector to ramp up production locally, the party will eliminate import duty on sanitary pads to improve health outcomes, particularly for girls.

“What we aim to really do is to make sure that we produce the sanitary pads in Ghana, and so until that happens, we are going to eliminate the import duties on sanitary pads to bring down the cost,” Vice-President, Dr Mahamudu Bawumia, said during the NPP manifesto launch.

The NDC’s 2020 manifesto, on the other hand, indicates that the party will revisit and scale up its intervention of providing free sanitary towels to needy and vulnerable females.

The opposition party introduced the intervention of free sanitary pads in 2014 and has brought it up again in its current manifesto in the hope that it will help keep girls in school throughout the academic year, as well as assist to improve the health and general well-being of teenage girls from vulnerable backgrounds.

At the launch of the NDC manifesto last September, the party’s vice presidential aspirant, Professor Naana Jane Opoku-Agyemang, intimated that thousands of young girls missed as many as five days of school every month simply because they could not afford sanitary pads.

She described the situation as “unacceptable” and “unfair,” and which the NDC was seeking to resolve.

“So we will provide free sanitary pads for girls to ensure that a perfectly natural, perfectly normal part of their life’s function does not become a barrier to education and to a better life. Under the circumstances, we will focus on girls under-20 who are in school,” she had said.

Analysing the promises of the two parties regarding the issue of sanitary pads, a social development expert, Mr Kojo Boohene Bampoe, in an interview with the Daily Graphic, said although most headlines focused on girls not attending school because they were unable to afford sanitary pads, there was little evidence that pads alone would keep them in school.

“There were stories told about girls who received reusable pads and yet missed school, which showed that providing the product alone is not necessarily enough to improve school attendance,” he said.

Mr Bampoe, who has in the last five years led advocacy on improving girl-child education across Africa, observed that there were a myriad of reasons why girls might not attend school, despite having access to sanitary pads at a subsidy.

In that regard, he said the government’s social protection policies must be all-encompassing such that all obstacles that hindered teenage girls, especially those in deprived areas from school, would be addressed aside from providing sanitary pads.

In 2014, the then NDC government, through the Ministry of Education, said it was going to use part of a $156 million loan facility it received to purchase sanitary pads for distribution to schoolgirls in rural areas.

The opposition party at the time, the NPP, criticised the intervention.