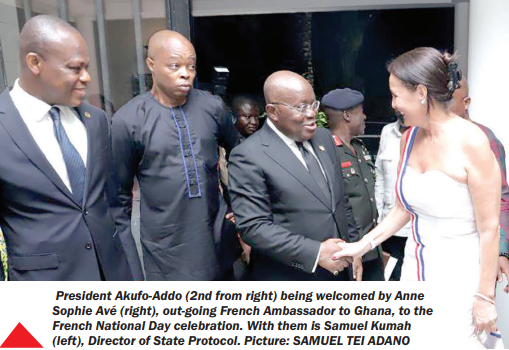 President Nana Addo Dankwa AkufoAddo has stressed that Ghana’s relations with France must be characterised by growth in trade and investment cooperation.

That, he explained, was the best way to develop a sound relationship and to also place Ghanaian products at the highest level of the value chain on the global market to create jobs for the youth.

President Akufo-Addo made the call during the French National Day celebration, also known as Bastille Day, at the French Embassy in Accra last Thursday night.

It was also to mark the end of the four-year duty tour of the France Ambassador to Ghana, Anne-Sophie Avé. Bastille Day is the common name given by English-speaking countries to the national day of France, which is celebrated on July 14 each year.

The French National Day is the anniversary of the Storming of the Bastille on July 14, 1789, a major event of the French Revolution. President Akufo-Addo, who spoke French for the better part of his delivery to the admiration of the large gathering, noted that the vision was still to build a free, independent and prosperous country.

The gathering included politicians, service commanders, journalists, business executives, chiefs, religious, and youth leaders — most of whom were dressed in white.

“Today, the world is faced with great challenges caused by COVID-19 and the invasion of Ukraine by Russia. Ghana and France are not spared. What these events have taught us is that we must strengthen and deepen our cooperation and friendship ties with one another; no country can afford to fly solo,” President Akufo-Addo added.

“It is either they succeed or perish together; therefore, Ghana and France must keep on working to build a much stronger partnership for mutual benefi t,” the President indicated. President AkufoAddo assured the French Ambassador that the country was ready to renew and deepen its relations with France for the prosperity and progress of their peoples.

He noted that while access to vaccines for developing countries, including Ghana, was diffi cult, France — through COVAX — donated vaccines to the country, and commended Ms Avé for her role in that effort.

The President traced the relations between Ghana and France back to many centuries, and said 65 years ago on Ghana’s independence, the two nations established formal diplomatic relations which had been the basis of a strong and cordial cooperation.

President Akufo-Addo noted that Ghana, as a country bordered on the north, east and west by French-speaking countries, acknowledged the strategic relevance of its immediate neighbours and France for its development.

He explained that this was the reason during his tenure as Minister of Foreign Affairs in the Kufuor Administration he took the privilege to lead the negotiations during the Francophonie Summit in September 2006 in Bucharest, Romania, which was presided over by the then French President, Jacques Chirac.

He noted that those negotiations enabled Ghana to become an associate member of the Francophonie without being appointed observer member beforehand.

The country was, at the time, also one of the very few countries to be a member of the Commonwealth and the Francophonie.

President Akufo-Addo indicated that Ghana intended to obtain full membership in the Francophonie, noting that: “I am certain that this goal will soon be met as by 2050, French will become one of the world’s most spoken languages, with at least 700 million of speakers, including 80 per cent in Africa.

The French Ambassador, who had been made Nkosuohemaa in two regions in the country, commended the people of Ghana for their overwhelming support and hospitality during her duty tour.

Ms Avé said all sectors of the Ghanaian society offered her some indelible memories, and to give back she was selling her personal items to establish a fund to be known as Akosua Fund to support some communities in the country.