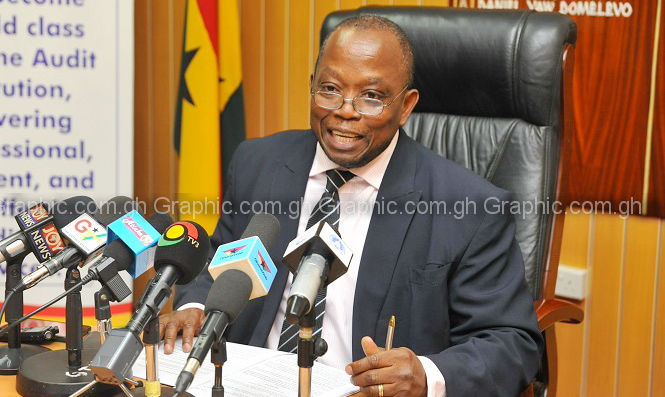 The immediate-past Auditor-General, Mr Daniel Domelevo, has called for a law to set a ceiling as filling fees by political parties for elected positions as part of measures to deal with corruption in the country.

According to him, the filing fees charged by parties were one of the major causes of corruption as people who paid those fees tried to recoup them when they were voted into power.

Moreover, he said the National Commission for Civic Education (NCCE) could create a common platform for the political parties on radio and television for campaign activities so as to deal with the money spent on campaigning.

“These guys are not philanthropists. They try to recoup whatever investments they have made and they recoup with interests. I think we have to look at how we do our election financing,” he said at a lecture held in his honour in Accra last Thursday.

Dubbed the Domelevo Accountability Lectures, the event was organised by the Centre for Social Democracy with support from the Friedrich Ebert-Stiftung (FES).
It was on theme: “Can a public officer fight corruption without political backing?”.

Mr Domelevo, who delivered the lecture via zoom, indicated that most ministries and their agencies were superfluous and that as a means of controlling government’s revenue there was the need to realign them to save the public purse.

Again, the former Auditor-General said the Ministries of the Interior, Defence and National Security could be combined as a means of controlling government’s spending,

“I think one Ministry of Infrastructure is enough to take care of roads, our railways, our aviation, etc. because there are departments that do professional works,” he said.

Moreover, Mr Domelevo said the creation of more regions and districts was wasteful expenditure, adding that “the money used in building regional and district administrations could have given us better access to healthcare, education and the basic needs of the people”.

Mr Domelevo called for stronger collaboration among anti-corruption agencies and the media to fight the canker of the practice in the country.

“Corruption is one dangerous enemy that nobody can fight alone, and we can’t fight corruption quietly so we have to collaborate in fighting the canker.

“Most Ghanaians cheer you on when they see you fighting corruption but do not take any step to do something about the practice. This attitude must stop,” he said.

A freelance journalist, Mr Manasseh Awuni, who was the keynote speaker, said the lack of political will did not only undermine the fight against corruption but created a hostile environment for individuals and groups that made the efforts to fight corruption.

According to him, Transparency International had come out with some key indicators to show whether there was political will to fight corruption or not and named them to include government initiatives to fight corruption, mobilisation efforts, application of credible sanctions and long-term public commitment and allocation of resources.

A Fellow of the CSD, Mr Mawuli Dake, said Mr Domelevo paid the price of fighting corruption by being hounded out of office.

The Director of Programmes at FES, Mr Michael Abbey, said his outfit was a social democratic organisation that sought to promote social democracy, economic development and security policy.