Elections must not lead to conflict— Catholic Archbishop 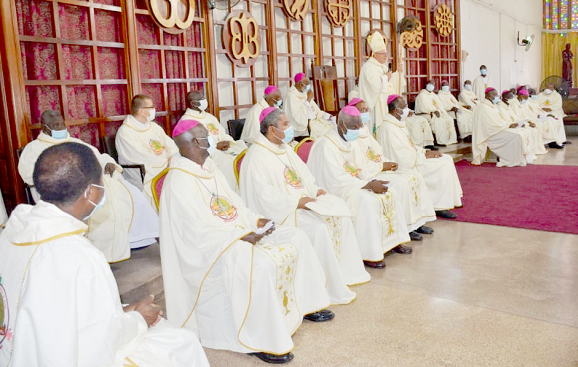 The President of the Ghana Catholic Bishops Conference (GCBC), Most Rev. Archbishop Philip Naameh, says elections provide an opportunity to choose the candidate with the best policy to govern, and should, therefore, not lead to conflict.

He said it was possible for Ghanaians to carry out elections devoid of conflict.

Most Rev. Naameh said this during an interaction with journalists after a welcome Mass at the Holy Spirit Cathedral for the Apostolic Nuncio to Ghana, Most Rev. Henryk M. Jagodzinski.

He said the ideal thing would have been that there were three or four presidential aspirants to enable the citizenry to better know and understand their messages in order to make an informed choice.

Most Rev. Naameh, who is also the Archbishop of Tamale, said the fact that currently there were 17 presidential aspirants “does not in itself provide a reason for conflict”.

Most Rev. Jagodzinski, the ninth Apostolic Nuncio to Ghana, was to have taken up the posting on May 3, 2020, but had to defer until September 8, 2020, because of the outbreak of the COVID-19 pandemic.

The Mass was co-celebrated with the Nuncio by all the bishops in the country, and attended by over 100 priests, and the religious and selected lay faithful in some societies in the church.

Speaking on the role of an Apostolic Nuncio in the church, he said the absence of a Nuncio meant that there were a number of things that could not be carried out.

“For instance, Sekondi-Takoradi Diocese is without a bishop. If the Nuncio were still there, by now they would have had a bishop, and so wherever the past Nuncio reached, it will lie down like that until the new Nuncio comes to be able to push the procedure forward. This is how important receiving a Nuncio is for any country,” Archbishop Naameh explained, adding that the arrival of a Nuncio was a very important event in the life of the church.
He said the fact that all the bishops in the country had to travel to Accra to co-celebrate the Holy Mass with the Nuncio signified the importance the church attached to such a position.

Earlier in a homily, Most Rev. Naameh assured the new Apostolic Nuncio of the unflinching support and cooperation of the church in the country, adding “we do so trusting in Jesus’ own promise (that) ‘I am with you always’”.

“Dear Monsignor Jagodzinski, as the church in Ghana welcomes you today, we associate ourselves with the words addressed to Mary at the Annunciation that ‘Be not be afraid’.

“This is our solemn pledge, and, therefore, you should not be afraid,” Archbishop Naameh said to the new Apostolic Nuncio.

He spoke against hypocrisy and injustice, and prayed for peace and unity among Ghanaians as the country prepared for the general election on December 7, 2020.

State of the Church

Briefing the Nuncio of the state of the Catholic Church in the country, he said from a small community of Catholics, the church had made a remarkable growth to become the largest single Christian community with strong representations in all the 16 regions.

He said the church was made up of four archdioceses, 15 dioceses and one vicariate with 19 bishops and one Apostolic Vicariate, and about 2,000 diocesan and religious priests and a vibrant lay faithful.

In a response, Most Rev. Jagodzinski conveyed special greetings from Pope Francis to the people of Ghana and the faithful in particular.

He said he had felt very much at home ever since he got into the country, and expressed gratitude to the Catholic Bishops Conference and the Catholic community generally, adding that he was impressed with the turnout at the Mass and full participation in the liturgy.

Most Rev. Jagodzinki takes over from Most Rev. Jean Marie Speich, the immediate past Nuncio to Ghana who is currently assigned to Cosovo.

Henryk Mieczyslaw Jagodzinski was born in Malogoszcz (Poland) on January 1, 1969, and was ordained a priest on June 3, 1995.