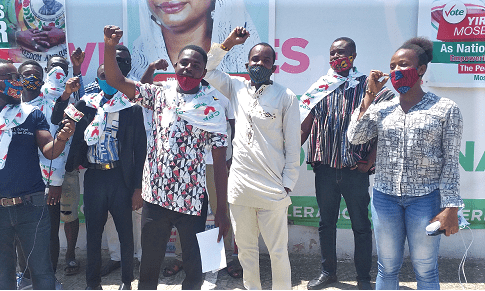 A youth group in the Convention People's Party (CPP) has called on the feuding factions in the party to smoke the peace pipe to boost their chances in the upcoming elections.

At a press conference held in Accra today (May 13), the group which described itself as the Concerned Youth of CPP said the protracted disagreement in the party was not a good development for a party that wanted to win power and form a government.

It has, therefore, called on the party leadership to respect the constitution of the CPP and put it above other considerations.

The press conference was addressed by the leader of the concerned youth and Chairman of the Tema West Constituency of the CPP, Mr Odeneho Kwasi Amposah, who was flanked by about 10 other members of the group.

The plaintiffs filed a case on February 26, 2020, for an interlocutory injunction restraining the defendants from continuing any party activities, including conducting the national delegates congress of the party.

Since then, the CPP has not been able to conduct any business to put its house in order for the 2020 elections.

The press conference suffered an initial setback when the Greater Accra Regional Chairman of the CPP, Mr Opare Addo, prevented the youth group from using the conference room at the national headquarters for the event.

Mr Opare explained to the Daily Graphic that the court had placed an injunction on all political activities of the CPP pending a determination of the case brought before it by the aggrieved members so it would be contemptuous to allow the press conference to be held.

He added that the youth group had not notified the Greater Accra Regional CPP executives of the intended action.

Unperturbed by the setback, the group went ahead to address the media at the entrance of the party headquarters, explaining that their action was in the interest of the larger youth and members of the party.

Mr Amposah stressed that the youth would not sit unconcerned and see the CPP go down when Ghanaians were looking up to it as a viable alternative to govern the country.

“We the concerned youth of the party are very worried about these developments and its unfortunate timing in an election year. We have a major interest to see our party make significant progress towards ensuring effective leadership and adherence to the constitution of the party,” he stressed.

He added that with the case now in court, it was important for the feuding parties to respect the ruling of the court and by extension, the party’s constitution.

Mr Amposah stressed that the press conference was just one of many actions that the concerned youth intended to embark on to ensure that the right thing was done to protect the legacy of the CPP.

“Ghana is in search of the true leadership that has eluded us as a country since the overthrow of Dr Kwame Nkrumah and the CPP government. We only witnessed weak educational system, weak healthcare system, poor social support systems, increasing poverty and loss of our natural resources. We need a united CPP to take back governance of this country and live the dream of our founder,” he said.