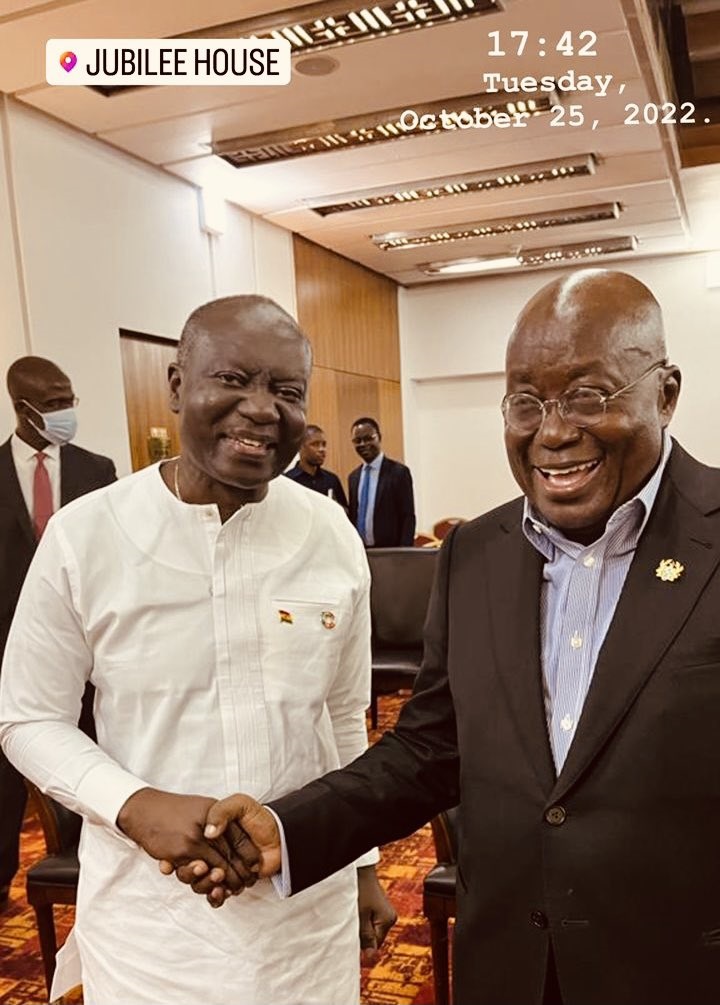 The leader of government business in Parliament, Osei Kyei-Mensah-Bonsu has disclosed that President Akufo-Addo has told members of the majority caucus clamouring for the removal of the Finance Minister to consider the timing of their call.

The timing here is in reference to the discussions with the International Monetary Fund (IMF), which the Finance Minister, Ken Ofori-Atta was leading and they are getting closer to a deal.

President Akufo-Addo, according to Mr Kyei-Mensah-Bonsu, who is also the Minister of Parliamentary affairs made the “passionate plea” when he met with the caucus on Tuesday night after some members of the group had held a press conference to demand the sacking of Mr Ofori-Atta as Finance Minister, and Charles Adu Boahen, as a Minister of State at the Finance Ministry.

Mr Kyei-Mensah-Bonsu who was speaking in a radio interview on Joy FM Wednesday morning, monitored by Graphic Online, said, “I think that we will have to have a meeting again, digest what the President said and then we move forward.”

When he was asked about the outcome of the meeting he said:

Were your members convinced about the President’s position?

On the principle that the Finance Minister should step aside or be reshuffled out of the Ministry of Finance and that Mr Ofori-Atta was not the only person leading the IMF discussion and that there are other members, Mr Kyei-Mensah-Bonsu’s response was that:

“Well in a football match, if the team does not perform, we look at the key player, if they don’t perform and the goalkeeper concede so many goals, we will blame the goal keeper, is that not the case, if the arrow head in the attack is not performing, we substitute him, is that not the case. You cannot say that there should be a complete overhaul. Sometimes the leader has a lot of influence over the entire team, so that is it. Indeed the group is not only talking about the Finance Minister, I guess you have heard that they have also cited the Minister of State at the Ministry of Finance [Charles Adu Boahen].”

How many members from majority caucus want #KenMustGo?

Responding to the number of MPs from the majority caucus wanting the Finance Minister sacked, Mr Kyei-Mensah-Bonsu said he does not have in hand the exact numbers.

“So I can’t speak to the exact number. What I can say is that, the caucus meeting we had yesterday [Tuesday], the overwhelming majority of the caucus members aligned with the request of the back bench.”

He said when they met in caucus on Tuesday, the number was about 95 and it is only two people, "who were unhappy with the process and procedure that the other group [that addressed the press conference] and the fact that they had not been consulted, so that was it. So the principle, was universally accepted, I don't want to talk about numbers."

Now is the time for us to come together and demonstrate a united front for Ghana; we need a progressive consensus to see us through this period. Victoriously and #AsOnePeople   #GhanaMustUnite #RobustRecoveryAhead pic.twitter.com/rtIDOs5EKz

At today’s stakeholder engagement with the @GhanaChamber of Commerce, hosted by @GhanaPresidency, I shared among other policy assurances, that the government is determined to protect our domestic markets and industries. #BuildingGhanaTogether #RobustRecoveryAhead #GhanaFirst pic.twitter.com/2ft037Td6p

Stakeholder engagement is key to ensuring that all voices are heard as we work towards Ghana’s economic recovery. BOG officials this morning had a very productive meeting with Heads of Banks and Forex Bureaus. #RobustRecoveryAhead #GhanaFirst pic.twitter.com/2GWA157ntK