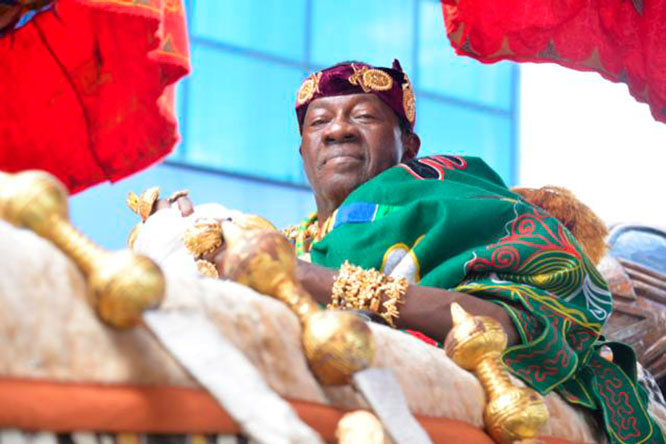 Daasebre Oti Boateng in a palanquin

The Paramount Chief of the New Juaben Traditional Area in the Eastern Region, Daasebre Oti Boateng, has called on various communities in the country to support the government in the fight against the COVID-19 pandemic.

He said the government alone could not cope with the pandemic challenge, therefore, it needed the support of all to succeed.

"There is the need for effective education on how to clean the environment as well as prevention methods in order to break the pathway of transmission," he added.

In an interview with the Daily Graphic in Koforidua in the Eastern Region, Daasebre Oti Boateng said as a way of preventing the spread of COVID-19, the New Juaben Traditional Council has adopted the use of a virtual meeting system, which was in line with the COVID-19 protocols.

He said the council had also been using information and communications and technology (ICT) to facilitate its work without necessarily coming into contact with members.

He urged other traditional rulers to adopt similar preventive measures in order to prevent COVID-19 from spreading.

Daasebre Oti Boateng said the traditional council had introduced a programme dubbed "operation clean communities", which was aimed at educating communities in the New Juaben Traditional Area on the need to clean their environment regularly to avoid contracting avoidable diseases.

These he said, were education, community engagement with stakeholders, economic and infrastructure, health, agriculture and demographic characteristics.

"We are doing this to support the government as part of our community development efforts," he said.

He explained that the project focused on the development of the communities to supplement the existing public and private sectors, by utilising indigenous community governance systems to build self-secure economies based on a citizen-community-chiefs partnership.

Daasebre Oti Boateng told the Daily Graphic that with a functional development model replicated in all communities, poverty, inequalities and insecurity would be significantly reduced.

He, therefore, called on Ghanaians to embrace the model and chart a new development order for Ghana.