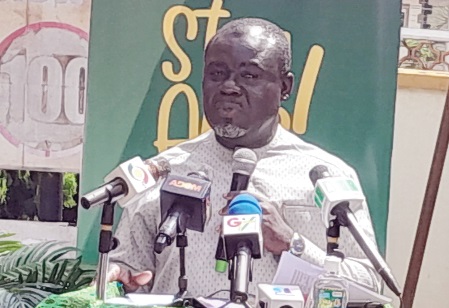 Kwaku Ofori Asiamah, the Minister of Transport, speaking at the event
30.5k Shares

The National Road Safety Authority (NRSA) has launched a road safety campaign for this year's Christmas and the New Year festivities, stressing the need for all stakeholders to play active roles to prevent road crashes.

Dubbed: “Operation Stay Alive”, the campaign emphasises the need for drivers and other road users to be disciplined and to obey road traffic regulations to ensure that no souls are lost to accidents.

The initiative was launched yesterday in collaboration with stakeholders such as the Driver and Vehicle Licensing Authority (DVLA), the Motor Traffic and Transport Division (MTTD) of the Ghana Police Service, the Ghana Road Transport Coordinating Council (GRTCC), the Ghana Private Road Transport Union (GPRTU), Street Sense, Bloomberg, as well as the Parliamentary Select Committee on Transport.

The Minister of Transport, Kwaku Ofori Asiamah, who launched the campaign, called on the NRSA to take the campaign on road safety to churches, mosques, market places and all public gatherings to ensure that this year's festive season accident-free.

Mr Asiamah urged members of the public to be ambassadors of road safety by not involving themselves in irresponsible behaviours that could cause accidents on the road.

While calling on driver unions to educate their members to be disciplined on the road, the minister stressed that it was important for pedestrians and other road users to be cautious about their lives when using the road.

He underscored the need for the NRSA and other stakeholders to deepen collaboration to achieve the United Nations (UN) Decade of Action target of halving road crashes by 2030.

"I want to call on the various transport unions to demonstrate commitment to ensuring road safety by ensuring that your members adhere to safety regulations on the road," he said.

The acting Director-General of the NRSA, David Osafo Adonteng, said as part of the Stay Alive campaign, the authority would move to public places to educate road users on the need to observe road traffic regulations to avoid accidents.

He noted that maintaining safety on the road was a shared responsibility, for which reason all members of the society must get involved to stem the tide.

"We have a common enemy to deal with, and that is road crashes. We want everyone to stay alive and celebrate this festive season in peace. Therefore, we urge everyone to be an ambassador of road safety," he said.

The General Secretary of the GRTCC, Emmanuel Ohene Yeboah, called on all drivers to prioritise their lives and that of their passengers as they conduct business during the festive season.

He urged the drivers to cooperate with law enforcement agencies to prevent accidents on the road.

The General Secretary of the GPRTU, Godfred Abulbire, stressed that it was important for safety compliance, especially pre-departure checks at bus terminals, to be intensified.

He said the GPRTU would play its role well to ensure that all bus terminals complied with safety measures to avoid accidents.