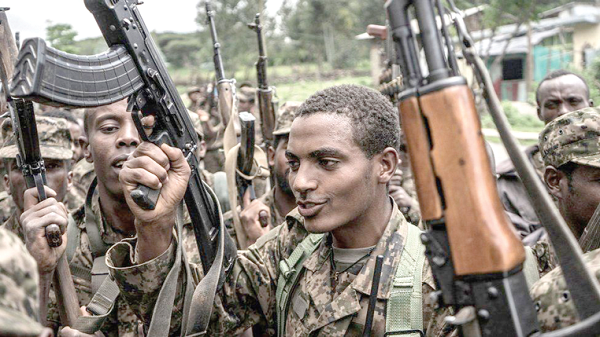 Seventeen months into a brutal civil war, the Ethiopian government announced that it had declared a unilateral truce, ostensibly to facilitate the flow of humanitarian aid and end the conflict without further bloodshed.

It is the first time since hostilities broke out that both sides have expressed willingness to halt fighting, a breakthrough of sorts in an atmosphere where threats of annihilation and even hate speech have become commonplace, on both sides.

Aid agencies have previously accused the Ethiopian government of enacting a humanitarian aid blockade to Tigray, where United Nations (UN) agencies estimate that some 40 per cent of the region’s six million inhabitants suffer from an “extreme” lack of food.

After the announcement, neither the Tigray People's Liberation Front (TPLF), nor the government has disclosed details of the ceasefire, when aid will arrive or even how aid convoys carrying urgent aid will navigate the heavily militarised roads to Tigray. There has also been no word on whether Ethiopia is contemplating restoring Tigray’s banking and communications services severed since July.

“Our position is clear,” the TPLF Advisor and a former Ethiopian Diplomat, Fesseha Tessema, has said. “We are ready to observe a ceasefire for humanitarian operations and for public services to be restored. But there have been no developments on the ground until this day,” he added.

Fesseha explained that the truce was not the result of any agreement, and that despite ongoing peace talks, the announcement had caught the TPLF off guard but Billene Seyoum, a spokesperson for Ethiopian Prime Minister Abiy Ahmed, did not respond to an email requesting clarity on the matter.

With hostile forces sealing off its frontiers, Tigrayan forces had pledged to continue fighting to break a siege that has prevented aid agencies from replenishing the famished region’s emptying food and hospital supplies.

Counterattacking, Tigrayan forces also committed a slew of atrocities in the neighbouring Afar and Amhara regions during a drive to overthrow Abiy’s government in the Ethiopian capital Addis Ababa. Ethiopian troops backed by an arsenal of newly procured drones managed to stave off the planned assault on Addis Ababa, forcing Tigrayan forces to retreat north.

After a year of outright refusal to contemplate round-table dialogue with the TPLF, which Ethiopian Parliament had designated a terrorist organisation; the federal government was forced to soften its stance due to military fatigue, diplomatic pressure and the strain on the national economy.

An African Union-led mediation effort, however, overseen by former Nigerian President, Olusegun Obasanjo, resulted in several trips to meet with authorities in Addis Ababa and Mekelle, but little else.

Since the mediation process began, an Ethiopian drone strike has killed more than 50 civilians at a displaced people camp in rural Tigray. International watchdog Human Rights Watch has since called the attack a war crime.

Weeks after the attack, the Deputy Chief of the Ethiopian Army, General Abebaw Tadesse, openly threatened to launch a ground offensive against Tigray.

With no de-escalation in the fighting, there is little to suggest that the warring factions were negotiating in good faith. Some observers also believe that the nature of the truce suggests a lack of sincerity.

“There’s also no explanation for why the government isn’t lifting the blockade on telecom, electricity and banking services. These would alleviate a great deal of the suffering, especially for the working class who can’t access their own savings to buy whatever is available in the local market,” he said.

With peace elusive and millions suffering as a result of one of the world’s worst humanitarian disasters, the announcement of a truce had been deemed a breakthrough.

But the opacity of the agreement and the lack of an implementation mechanism render it difficult to ascertain if concrete action is set to follow.

Less than a month into the war and when famine was barely a brewing threat, news of the Ethiopian government signing a deal with the UN securing unimpeded humanitarian access to Tigray made headlines but that access was never granted.

Instead, UN workers were denied access for months to two UNHCR-run refugee camps, which hosted more than 25,000 Eritrean refugees prior to the war. The camps were systemically razed to the ground between December 2020 and January 2021. By May 2021, UN staff were finally granted access to the ruins of the camps.

There is also the issue of whether Eritrean President, Isaias Afwerki, would fall in line with any peace deal. Unlike Abiy Ahmed and Tigrayan counterpart, Debretsion Gebremichael, the Eritrean president’s recent statements appear to highlight an aversion to dialogue with the TPLF.

The war, initially contained in the Tigray region, has since spilled over into neighbouring regions but there is no word on how encompassing the truce is. The Afar People’s Party, for instance, has criticised the truce for lacking transparency and neglecting the needs of the Afar people.