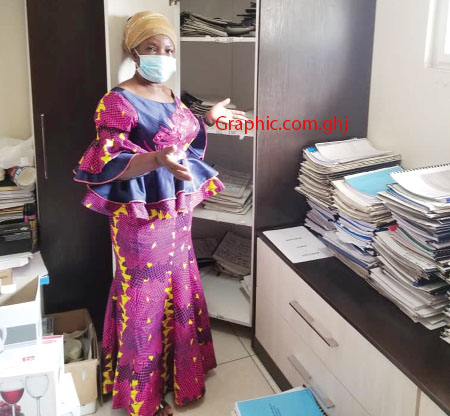 Mrs Gifty Ohene-Konadu showing some of the business plans and proposals to our reporter
30.5k Shares

Over 800 businesses have flooded the One-district, One-factory (1D1F) Secretariat in Accra with business plans and proposals for the consideration of the government.

Under the private-sector-driven initiative, if the proposals are approved, the businesses will set up factories in any of the 216 districts.

The National Coordinator of the 1D1F Secretariat, Mrs Gifty Ohene-Konadu, revealed this to the Daily Graphic in an interview last Monday.

The Daily Graphic had gone to find out about the number of completed and ongoing projects under the 1DIF initiative across the country.
Currently, she said, each of the 216 districts of the country had a factory, adding that while some were fully operational, others were at various stages of completion.

On the 800 business proposals that were seeking government support, she said if they were approved, the businesses would enjoy a five-year tax waiver, the government would absorb part of the interest payment to banks, among other incentives under the 1DIF initiative.


She said the business proposals were being assessed and those that were viable would be recommended to the banks for support.

When asked to provide details on the specific number of completed factories so far, Mrs Ohene-Konadu said some were functional and operational, while others were at various stages of completion.

“We cannot provide you with the specific number of completed ones now because there are many that are at various stages of completion,” she said.

One of the government’s main policy pledges is to establish at least one manufacturing or processing facility in each of the 216 districts.

Checks by the Daily Graphic indicate that 28 factories have been completed and are operating fully as direct 1D1F projects, while 153 are currently at various stages of completion, whether as new factories, revived or expanded factories, while new factories are under construction, including small-scale processing factories.

Grouped under manufacturing, agricultural, production and recycling, the list also highlights the sectors, locations and sizes of the factories, as well as the nature of employment they provide.

The GCB Bank, the largest bank in terms of assets, last year said it would commit GH¢1 billion to 1D1F projects and set up an internal unit focused on the initiative.

The bank has consequently nominated 216 officers to work with the various districts of the country to help ensure that entrepreneurs selected under the 1D1F initiative benefit from easy credit facilities from the bank.

Two factories it has financed – a timber processor and a paper goods company – are already operational in the Eastern Region.

The second-largest commitment, totaling GH¢880 million, has come from the United Bank for Africa (UBA).

The government estimates that the banking sector will contribute about GH¢4.4 billion to prop up the 1D1F initiative.

The platform on which the New Patriotic Party (NPP) won political power in December 2016 marks a decisive shift towards industry, with the idea of generating jobs in all parts of the country and securing more value from Ghana’s raw materials.

The 1D1F initiative is to ensure more sustainable food supply and create jobs for the jobless.

The first public-sector-led industrialisation effort in Ghana took place in the 1960s under Kwame Nkrumah, Ghana’s first President, but it ran aground, largely as a result of mismanagement after his overthrow in 1966.