Ahead of NDC national polls: Don’t use my name for votes - Mahama to aspirants 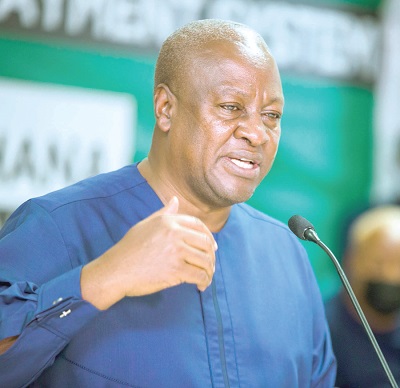 Former President John Dramani Mahama has once again cautioned the various aspirants vying for national executive positions in the Saturday’s National Delegates Congress of the opposition National Democratic Congress (NDC) to desist from using his name to canvass for vote ahead of the elections.

According to Mr Mahama, he had no preference and, therefore, had not endorsed any candidate in the upcoming national executive elections.

Former President John Dramani Mahama also denied a publication in a tabloid newspaper that he and his family were in support of one of the aspirants for National Chairman position of the NDC.

“The said claim and the publication are false, and the rank and file of the party are encouraged to disregard them”, he said.

A press release issued and signed by the Special Aide to the former President, Joyce Bawah Mogtari, said the message from Mr Mahama was a reminder to an earlier statement from his (Mahama) office that he had no preference for any candidate in the national executive elections.

The release said the caution was coming on the heels of an attempt by some candidates to push a narrative, despite his previous cautions, that he supported their candidature.

“Of paramount interest to President Mahama is victory for the NDC in 2024 to work with expectant and suffering Ghanaians to "Build the Ghana we want," the release said.

The release therefore urged supporters of the NDC to work with whoever the delegates choose and elect at the congress as their new national executives.

The opposition NDC will hold its 10th National Delegates Congress on the theme: “Rallying for victory 2024; Ghana’s hope" at the Accra Sports Stadium on Saturday, December 17, 2022 to elect national executive officers to steer the affairs of the party for the next four years and ahead of the 2024 general elections.