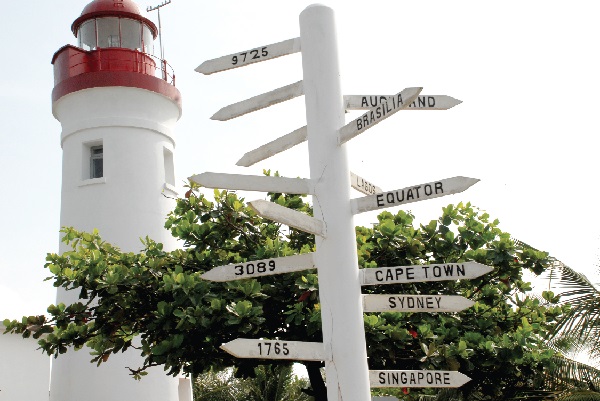 The directional and nautical milage of countries at the light house at Cape Three Points
30.5k Shares

It shares boundary with Sekondi-Takoradi Metropolitan Assembly (STMA) at Apremdo Bridge over the Whin River, the Nzema East Municipal Assembly, and the Mpohor Wassa East District as well as Tarkwa-Nsuaem Municipal Assemblies and the sea to the South in the Western Region.

The Ahanta-West constituency is about 25 minutes drive from the commercial and administrative capital of the region, Sekondi-Takoradi.

It has 36 electoral areas and six area councils - Apowa, Ewusiejoe, Busua, Dixcove, Abura and Agona Nkwanta and 52 assembly members, made up of 36 elected members and 16 government appointees.

With all the beautiful beaches, agricultural lands, tourism, among others, the constituency still has some of the most tortuous road networks in the country.

With its arable land, long beautiful coastline, waterfalls, heritage sites and forest reserve for tourism purposes, the Ahanta West constituency is yet to optimise its natural resources into improving the living conditions of the people as well as attract investors.

Residents are optimistic that what could turn the fortunes of their constituency around was an improvement in the road network of the area.

The constituency with its capital as Agona Nkwanta has a total population of 153,140 people according to the 2021 Population and Housing Census report.

The constituency is considered as a stronghold of the New Patriotic Party (NPP).

The current Member of Parliament (MP) for the area is Ebenezer Kojo Kum, who entered Parliament on the ticket of NPP in 2016.

Mr Kojo Kum, who is also the Minister of Chieftaincy and Religious Affairs could not be reached for his comments.

One of the important needs of the constituency is improved road network which requires urgent attention since those in the remotest part of the municipality struggle to have access to the municipal capital for basic needs and even travel to the regional capital.

At the moment, the road between the municipality and the regional capital is in a very bad state even though the government assured the people that it was in talks with the country’s development partners to get it fixed.

Aside from the Agona-Nkwanta-Takoradi stretch, the road linking the municipal capital to Lower and Upper Dixcove, Akitekyie, Busia, Pumpuni, Akwadae, Miemia, Cape Three Point, among others, is also not in good shape.

Even though there are contactors on all the roads linking these areas, at the moment there are no visible works going on with the projects while they abandoned. The stretch between Nyamebekyere to Miemia, which is a little over 20km linking the coast with the main Elubo-Apimanim highway, is in a deplorable condition and the contractor is not on site.

The stretch linking the Agona-Nkwanta to Lower, Upper Dixcove and Cape Three Point has been gravelled with the construction of bridges ongoing, when the Daily Graphic visited the area.

Although, some of the roads are being attended to, residents say work has been slow.

A resident, Egya Ato, said, “from Cape three Point to Agona, or the Dixcove Hospital are nearest places to access health care.”

“Look at the nature of the roads, transporting people who are sick on motorbike, the aged, pregnant women and children travel on motorbikes or aboboya. We are sure our multi million question is that when million would these roads be fixed – our women with processed fish struggle to get to the municipal capital,” he said.

The Western Regional Minister, Kwabena Okyere Darko Mensah, at several fora since 2019 had reemphasised government's commitment to fix the deporable roads in the area.

The minister said “ a construction company that undertook an initial repairs on the section of road at Apowa, has been assigned to carry out repair works on the stretch which is about three kilometres."

The Municipal Chief Executive (MCE) of Ahanta West, John Agyare, also expressed the hope that the roads would be fixed.

The constituency with growing population has one main health facility known as the Nana Hima Dekyi Hospital popularly known as (Dixcove Government Hospital).

It also has some health facilities at Agona Nkwanta and residents are awaiting for the completion of the new regional hospital sited at Apimanim in the constituency and a district hospital also under construction at Biahu.

Construction work on the district hospital, which is under the government’s Agenda 111, is ongoing with the contractor on site working.

This, the residents said, would position the municipality well in terms of healthcare delivery. However, the challenge is the bad roads linking the communities to the urban centres.

The constituency largely falls within the country’s high rain forest vegetation zone, which captures several hectares of plantation of the rubber plant by Ghana Rubber Estate and other out-growers.

Other activities such as charcoal burning in the forest except the Cape Three Point Forest Reserve, which dominates an area of 51.02 square kilometres, has been reduced to secondary forest.

The municipal assembly is not happy with other environmentally unfriendly activities such as coastal sand winning, which have consequently caused soil erosion and deterioration in soil fertility in the municipality in recent times.

Illegal mining popularly known as galamsey is rife in the area which had had effects on water bodies, forest and rubber plantations.

Farming is one of the main activity in the constituency, which employs about 70 per cent of the population.

The major crops grown in the district are maize, oil palm, rice, cassava and rubber. With Norpalm Ghana and GREL are the two major companies with large hectares of oil palm and rubber plantations, respectively, and as off takers from out growers.

Ahanta West constituency boasts a lot of tourism potentials but are yet to be developed to create jobs for the youth and generate revenue.

However, residents believed that if the roads to Cape Three Point and its beautiful coast are fixed it could generate a lot of employment for the young people in the area who are migrating to the city centre for non-existing jobs.

The constituency also has one of the most beautiful waterfalls that is undeveloped to attract tourists in Akwadae on the way to Cape Three Point.

The lighthouse of Ghana Ports and Harbours Authority at the Cape Three Point and the coast in itself is a beautiful spectacle to behold but the roads to these places are not accessible.