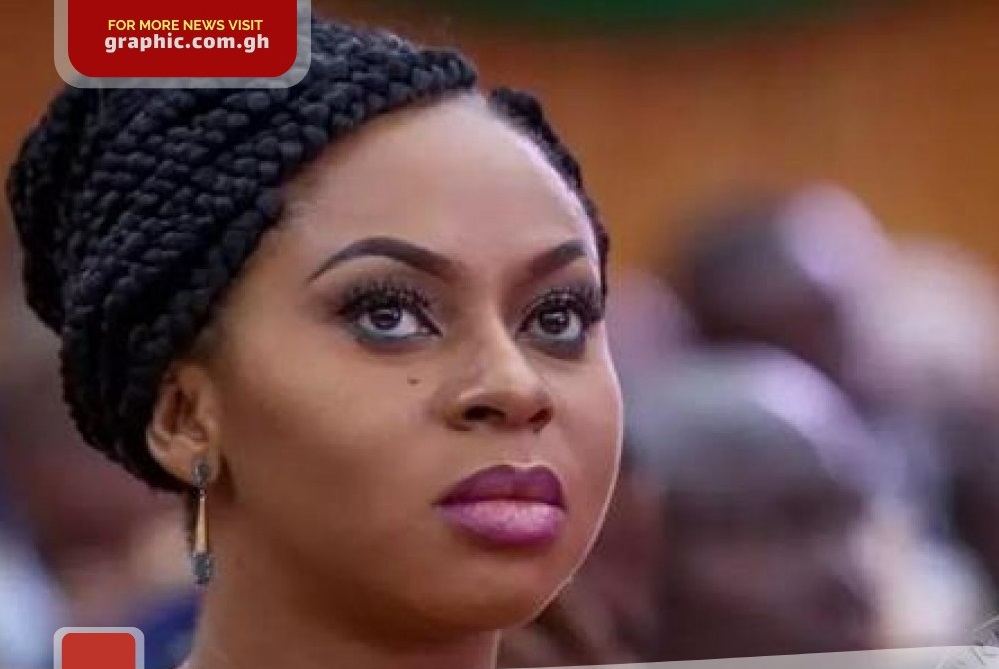 Sarah Adwoa Safo has been dismissed from office as a minister of state. Follow @Graphicgh

Sarah Adwoa Safo has been dismissed from office as a minister of state.

A press statement issued by Eugene Arhin, the Director of Communications at the Presidency on Thursday night (July 28, 2022) announced the decision of President Nana Addo Dankwa Akufo-Addo to revoke her appointment as Minister of Gender, Children and Social Protection.

Ms Safo, who doubles as a New Patriotic Party (NPP) Member of Parliament for Dome-Kwabenya in Greater Accra has not been at post for more than one year.

The minister of Sanitation and Water Resources, Cecilia Abena Dapaah, who has been a caretaker minister for the Gender Ministry is to continue handling the ministry until such a time that the President appoints a substantive minister.

“In accordance with Article 81(a) of the Constitution, the President of the Republic, Nana Addo Dankwa Akufo-Addo Akufo Addo, has revoked the appointment of Hon Sarah Adwoa Safo, Member of Parliament for Dome Kwabenya, as Minister for Gender, Children and Social Protection, with immediate effect," the statement said.

(a) his appointment is revoked by the President; or

(b) he is elected as Speaker or Deputy Speaker; or

(c) he resigns from office; or

On October 6, 2021, it was announced that President Akufo-Addo had extended the leave of absence from office for Adwoa Safo.

She had earlier asked for leave according to the statement issued by the Director of Communications at the Presidency, and that leave was to have ended August 31, 2021.

The statement explained that she had sought leave of absence for personal reasons.

But just around that same period, she shared videos of herself on social media, especially on Tiktok, dancing and miming.

It later also came out that as MP for Dome Kwabenya, she had absented herself from Parliament for more than 15 days without permission from the Speaker as stipulated in law.

This, prompted the Speaker to refer her issue to the Privileges Committee of Parliament for explanation as to why her seat should not be declared vacant.

She was referred to the committee with two other MPs, Kennedy Ohene Agyapong for Assin Central and Henry Quartey for Ayawaso Central.

The Committee of Privileges has therefore by a majority decision recommended that the Dome-Kwabenya seat, currently being occupied by Sarah Adwoa Safo should be declared vacant for absenting herself from Parliament for more than 42 days without permission from the Speaker, and also refusing to take advantage of an opportunity offered her to provide an explanation.

The Minority, however, according to the report, acknowledges that numerous opportunities has been given her, but wants the entire House to rather take the decision on the way forward.

Her issue came up in Parliament Thursday afternoon but the House could not reach a consensus on how to handle the report of the committee after a proposal by the Majority Leader, Osei Kyei-Mensah-Bonsu for the House to adopt the report without going through the motion route was rejected by the Minority Leader, Haruna Iddrisu.

The Speaker therefore adjourned the issue to enable him prepare a written ruling on the issue. The House then adjourned the matter sine die while the House went on a break Thursday to resume in October 2022. 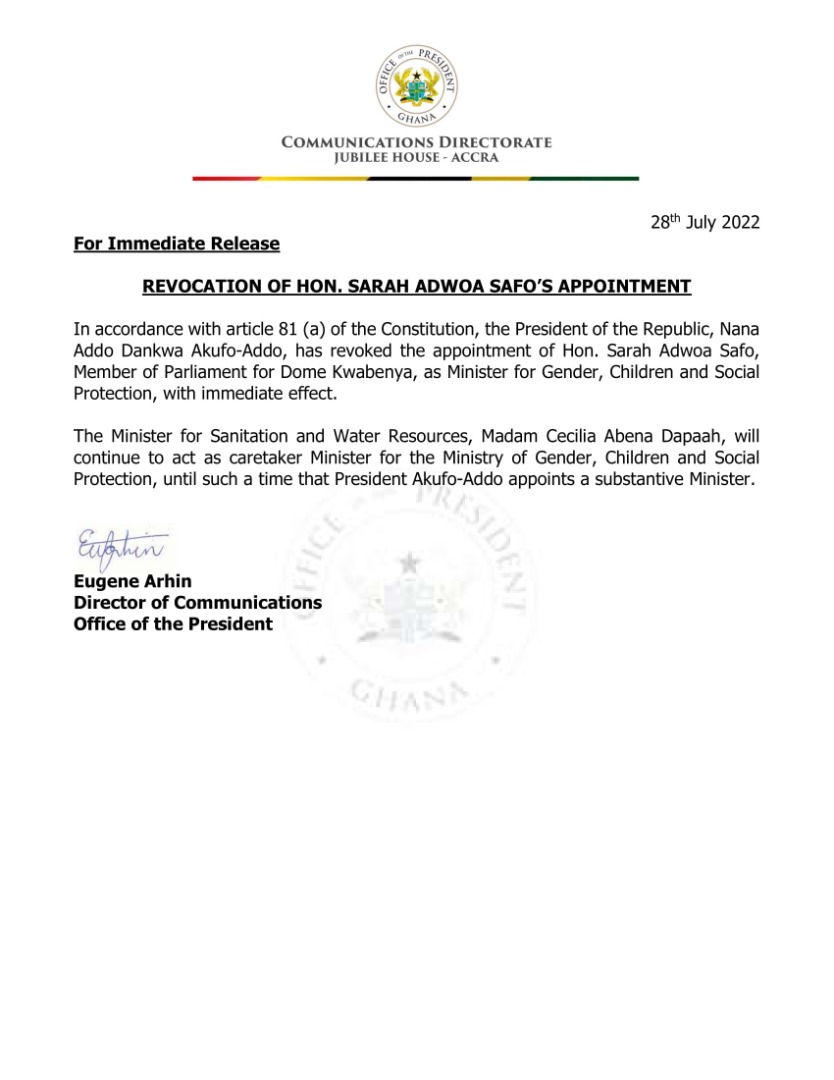 In accordance with article 81 (a) of the Constitution, the President of the Republic, Nana Addo Dankwa Akufo-Addo, has revoked the appointment of Hon. Sarah Adwoa Safo, Member of Parliament for Dome Kwabenya, as Minister for Gender, Children and Social
Protection, with immediate effect.

The Minister for Sanitation and Water Resources, Madam Cecilia Abena Dapaah, will continue to act as caretaker Minister for the Ministry of Gender, Children and Social Protection, until such a time that President Akufo-Addo appoints a substantive Minister.