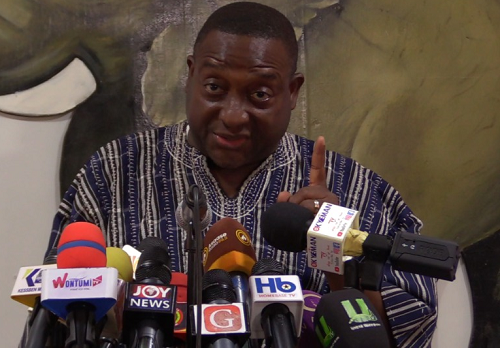 The Director of Communications of the ruling New Patriotic Party (NPP), Yaw Buaben Asamoa, has urged the rank and file of the party to accept the yet to be released list of Metropolitan, Municipal and District Chief Executives (MMDCEs) nominees by President Akufo-Addo.

He said the list had been thoroughly vetted and that all the people who made it are competent to represent the President at the local level.

He said although it is normal for some people to feel unhappy about the nominee list, particularly when their preferred candidates do not make the list, they should still accept whoever the President presents.

Mr Asamoa was speaking at a press conference organised by the party at its headquarters in Accra on Friday afternoon, September 17, 2021.

The Director of Communications at the Presidency, Mr Eugene Arhin on Wednesday, September 15, 2021, said in a post on social media that the list of the MMDCEs nominees was ready and that it was to be forwarded to the Minister of Local Government, Decentralisation and Rural Development, Mr Dan Botwe on Thursday, September 16, 2021.

He added that Mr Botwe would soon announce the new MMDCEs.

For Mr Asamoa, President Akufo-Addo has the prerogative to appoint people who could help him at the local level to enable him realise the vision of his government, hence the need for party supporters to accord him that respect and work with those that he will choose to represent him.

He also encouraged former MMDCEs who could not be retained in the current administration to work with the new MMDCEs, urging them to offer their support and expertise.

He however, admonished the new MMDCEs to open up to advice and opinions from the party’s members, including former appointees.

“We are advising the nominees to open up for opinions”, Mr Asamoa noted, adding that all the nominees should work to justify why President Akufo-Addo chose them over others.

The NPP’s Communications Director also urged the party members to accord the party’s mass membership registration exercise with the needed seriousness.

According to him, the mass polling station registration will help the party to know the number of people who are likely to vote for the party at any given elections.

He said the registration will also help the party to plan for future elections, urging polling station executive and Constituency coordinators to treat the exercise with all seriousness.

It will be recalled that the General Secretary of the party, John Boadu at a press conference at the party’s head office in Accra on Friday, September 10, 2021, announced the decision of the party to commence mass polling station registration exercise, starting September.

The exercise, which is expected to last for 20 days, he explained, will enable the party to know the over six million people that voted for the party in its last election in 2020. About 40,000 registers have so far been sent to all the polling stations where the exercise will take place.

Mr Asamoa also took a swipe at the General Secretary and 2020 presidential candidate of the opposition National Democratic Congress (NDC), Mr Johnson Asiedu Nketiah and former President John Dramani Mahama, for allegedly making false claims to their party members that the NPP cheated them in the 2020 general elections.

According to him, the NDC could not prove such claims at the country’s Supreme Court and therefore has no basis to be going about telling their supporters that they were cheated.

For him, Mr Asiedu Nketiah and Mr Mahama are spearheading such claims to enable them lead their party, adding that Mr Asiedu Nketiah is aiming at the party’s Chairmanship position whilst Mr Mahama wants to be retained as Presidential candidate for 2024 elections.