Report reveals how girls are facing physical abuse by parents 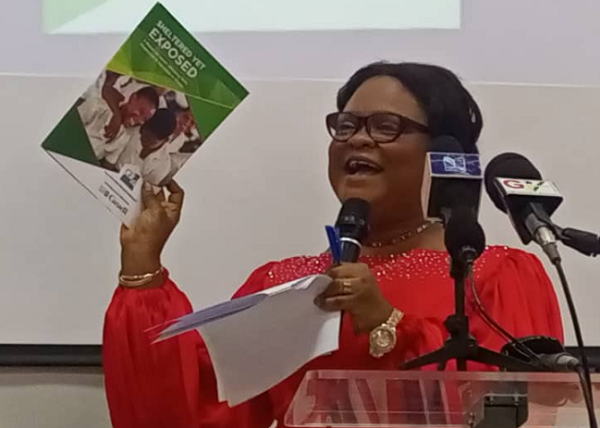 Girls Excellence Movement (GEM), a volunteer-driven non-profit organisation has called for a deliberate girl-focused institutional reform in the education sector, especially in the area of guidance and counseling in pre-tertiary institutions.

According to GEM, a number of girls in Ghana are going through challenges that need to be addressed by all stakeholders, adding that the girl-child education cannot be met if the various challenges confronting them are not adequately addressed.

Some of these challenges are in the areas of abuse, medical and psychological among others.

The call came when a report by GEM in partnership with the United Nations Population Fund (UNPFA), Ghana was launched on Wednesday (August 23, 2022), on the theme “Sheltered, Yet Exposed”.

The report, which contains findings from data collected between 2018 and 2021 from 2,000 girls in 15 schools across six regions with professional help from IFEST and printing support from the UNFPA, Canada.

According to the report, 50.1 per cent (1,020) out of 2000 girls interviewed were being raised by guidance other than both parents.

This, the report said exposes the girls to financial difficulties, which makes them vulnerable to sexual exploitation with trauma flashbacks and other mental challenges.

Presenting the findings, a researcher, curriculum expert, and education policy analyst at the University of Cape Coast (UCC), Dr. Peter Anti Partey said 46% of the girls had experienced one form of abuse or the other, with 51% of them being sexually abused.

Dr Partey added that one in four girls is in a non-platonic relationship with little or no sex education.

The report further revealed that one in two of the girls find mathematics and other STEM subjects difficult though they are aspiring to careers in the health and medical sciences.

From the findings, 34% of the girls want training on how to develop confidence, Dr Partey stated.

Also, 80% of the girls look up to people in their immediate family, yet the data revealed parents as the highest perpetrators of physical or verbal abuse.

He, therefore, called for STEM-focused interventions; increased parental attention to girls, and the involvement of religious and traditional leaders in awareness creation towards building a nurturing society that values girls’ education by providing the enabling environment for the girls to strive into powerful and transformational leaders.

She said the President believes “achieving excellence in girls’ education is a must if the country is to shed off the evils of poverty, ignorance, and disease, and put onto the path of progress and prosperity”.

She added that the aforementioned is one of the underlying beliefs that influenced the implementation of the Free SHS Policy and the Girls-In-ICT Initiative.

She said the launch of the report was timely and called on all to help preserve and protect the girls. “The sexual harassment and abuse experiences shared by these girls are heartbreaking and disheartening. Why should our girls be subjected to such harsh realities, yet be expected to excel on the academic ladder to become women who play meaningful roles in society?”

In her welcoming address, the Founder and Executive Director of GEM, Ms. Juliana Ama Kplorfia said GEM believes in education as a right and a pathway out of poverty for girls.

She said GEM since its inception has taken its flagship programme, dubbed “Inspiration-On-Wheels” to 67 schools.

This, she said has impacted over 17,000 girls to aspire to leadership in all fields.

“We have also distributed over 33,000 packs of sanitary pads, to keep the beneficiary girls clean, comfortable, and Confident in the classroom during their menses”.

“We have achieved these riding on the continual support from benevolent individuals, businesses, other organizations, and our thriving army of mighty volunteers. Our work won the National Philanthropy Award in ‘Girls Education Advocacy’ in 2021, empowering us to keep up the good work”, she added.

More on the Report

She said the report contains findings of data collected between 2018 and 2021 from 2,000 girls in 15 schools across 6 regions with professional help from IFEST and printing support from the UNFPA Canada.

”Our goal for this launch is to create the necessary awareness and possibly secure support for girls everywhere, contributing immensely to the achievement of the UN Sustainable Development Goals 3, 4, 5, 10, and 17 respectively”, she explained.

“This is even more important because, a girl who is being taught by her abuser teacher, would definitely struggle to excel in academics and a girl who is constantly battered and put down at home, will most certainly struggle to aspire to greater heights” she stressed.

For her part, the Programme and technical specialist for Indolence’s and Youth unit of UNPFA, Adjoa Yenyi said there should be measures to ensure girls have holistic education.