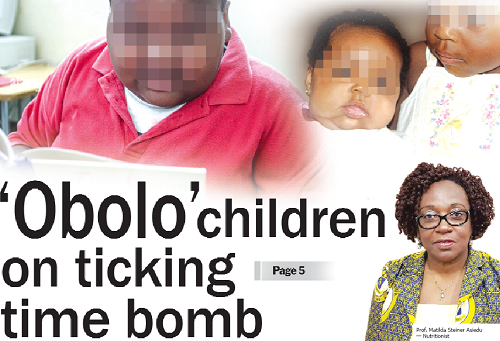 In Ghana, it has been a common desire for parents to have bouncing babies. In fact when new mothers are visited by family members, relations and friends, the one expression of congratulations that is tossed around most of the time is “what a beautiful bouncing baby you’ve got,” and the fresh mother, and indeed the father too, will be basking in the “ayekoo” salutations.

Sometimes, the parents, in their effort to maintain the “bounciness,” feed the baby with all sorts of food. As recounted by one mother, “when I gave birth to my first child, my grandmother made me believe that children who were plump were healthier and such children reflected the affluence of the parents”. “So”, she said: “I ensured that I fed my children very well and sometimes even overfed them and this has resulted in all my children being bigger than their other colleagues when they started school”.

Over the last four decades, the “obolo” trend has developed to a stage that is worrisome to health officials. The situation is alarming because childhood obesity, properly so called, is associated with early onset of risk diseases such as cardiovascular diseases, diabetes and high blood pressure. Analysis indicates that approximately, 19 per cent of children in Ghana as of 2020 were either obese or overweight.

The overall prevalence of childhood obesity and overweight in Ghana currently is 8.6 per cent and 10.7 per cent, respectively, and this is comparable to the prevalence values reported by other regional studies in Africa.

These prevalence values are, however, higher compared to the expected value for developing countries and the world at large. Nutritionists and paediatricians alike are all alarmed because over the past decades, the focus of almost all nutritional programmes in developing countries had been on undernutrition, as that is a well established and recognised problem of the developing world.

While undernutrition still remains a problem, the issue of childhood obesity which is seen as a problem of affluent and developed countries is currently being faced by most developing countries now due to urbanisation and economic development.

In Ghana, the prevalence of overweight and obesity among children and adolescents is said to have risen dramatically from just four per cent in 1975 to over 18 per cent in 2016.

A similar rise is said to have occurred among both boys and girls by 2016, where 18 per cent of girls and 19 per cent of boys were considered as being overweight.

A nutritionist at the Nutrition and Food Science Department, School of Biological Sciences, College of Basic and Applied Sciences, University of Ghana, Professor Matilda Steiner-Asiedu, who sounded the alarm bells on the looming crisis of obesity among children in Ghana during a media engagement organised by Nestle Ghana, cautioned that the country was presently leading in statistics on children who were obese because of the numerous choices of ‘junk’ foods available.

In an interview to clarify the situation further, she said currently, children had a wide variety of choices of sugary drinks and unhealthy foods as against they eating from the household setting.

Prof. Steiner-Asiedu said the current increase in the intake of energy-dense foods that were high in fat and sugars; and an increase in physical inactivity due to the increasingly sedentary nature of games some children were engaged in such as watching cartoons and playing computer games, being transported to school, among others, were causing more children to become obese.

The situation of obesity, she said, had presently put the country on a double burden of malnutrition, explaining that while many children were suffering from undernutrition in especially poor communities, many more were also living with overweight due to their choices of foods. She added that it was not uncommon to find undernutrition and obesity co-existing within the same country, the same community and the same household.

Urbanisation and economic development are said to be some of the influencers resulting in the increased in childhood obesity as they have resulted in changes in dietary patterns in both developed and developing countries.

Dietary patterns are said to have shifted from traditional nutritious foods which are high in complex carbohydrate and vegetables, to foods containing high fat and calories.

Also eating times in most homes have changed as parents get home late and therefore children eat late in the evening.

On the economic level, obesity is high in the urban settings, as people live a sedentary lifestyles where they order fast foods and take-aways from a host of international food chains which are presently available in every nook and cranny, stay behind the television for long hours and drink a lot of artificially flavoured drinks.

Effects of obesity on children

A clinical psychologist, Mr Adolf Awuku Bekoe, who spoke on the impact of obesity on children, said childhood obesity was a complex health issue which occurred when a child was well above the normal or healthy weight for his or her age and height.

He gave some of the psychological and emotional effects of obesity on children to include sleeping disorders, anxiety, depression and low self-esteem.

Obesity, he said, could also make it harder for children to participate in activities, and engaging in chores may even become dreadful.

Obese children, he said, could also become a target for bullying in school and even in the household settings.

Confirming Mr Bekoe’s assertion that children who were obese lacked self-esteem and were targets of bullying, an eight- year-old boy who is presently in Class Three said his classmates used to call him ‘obolo’ and he felt very offended.

He said he was very big from Kindergarten up to Class Two and his friends normally made fun of him, and that, he said, made him dislike going to school.

He said he did not like going to school on days that they had physical education (PE) because his PE kits were tight on him and so when he was playing football with his friends, they would at a point stop running and be staring at him.

The most worrying fact is that with obesity, there are no symptoms to show that the child is sick other than their weight which is above normal as compared to underweight which presents with a sickly child.

The situation, which is a global one according to the World Health Organisation (WHO), comes about as a result of an energy imbalance between calories consumed and calories expended.

The world health body estimates that over 340 million children and adolescents worldwide, aged five to 19 years, were overweight or obese as of 2016 and considers it as a public health problem.

Childhood obesity is said to have reached global epidemic levels with approximately 41 million children under age five years being overweight or have obesity globally with about 25 per cent of them living in Africa.

According to health experts, parents should not make changes to their children’s diet based solely on perceptions of overweight as all preschool children exhibit their own individual body structure and growth pattern.

They say assessing obesity in children is difficult because children grow in unpredictable spurts and so it should only be done by a health care professional, using the child's height and weight relative to his or her previous growth history.

The New York State Department of Health recommends that weight loss is not a good approach for most young children, since their bodies are growing and developing and that overweight children should not be put on a diet unless a physician supervises one for medical reasons, saying a restrictive diet may not supply the energy and nutrients needed for normal growth and development.

The department said for most very young children, the focus should be to maintain the current weight, while the child grows normally in height.

They said the most important strategies for preventing obesity were healthy eating behaviours, regular physical activity and reduced sedentary activities such as watching television and playing computer games.

Parents and caregivers, they say, can help prevent childhood obesity by providing healthy meals and snacks, daily physical activity and nutrition education for the children.

The WHO recommends that to help reduce overweight and obesity, as well as their related noncommunicable diseases, which are largely preventable, supportive environments and communities are fundamental in shaping people’s choices by making the choice of healthier foods and regular physical activity the easiest, thereby preventing overweight and obesity.

At the individual level, it calls on parents to limit energy intake from total fats and sugars, increase consumption of fruit and vegetables, as well as legumes, whole grains and nuts and engage in regular physical activity with a recommended 60 minutes a day for children.

It called on the food industry to play a significant role in promoting healthy diets by reducing the fat, sugar and salt content of processed foods, ensure that healthy and nutritious choices are available and affordable to all consumers, restrict marketing of foods high in sugars, salt and fats, especially, those foods aimed at children and teenagers.