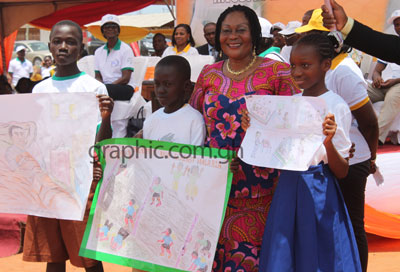 Ghana will soon set up a factory to produce larvicides, a medicine that can kill mosquito larvae, the First Lady, Mrs Lordina Mahama, has announced.

The establishment of the factory, she said, would add to the various interventions made so far to fight malaria and bring it under control.

Mrs Mahama was speaking at the commemoration of World Malaria Day at the Adenta Community School Complex in Accra yesterday.

The event was celebrated on the theme: “Invest in the Future: Defeat Malaria”.

So far, 12.4 million treated mosquito nets have been distributed to various  homes, making Ghana the first country south of the Sahara to achieve such a feat.


Malaria kills more children than any other disease in Ghana. It is also the leading cause of miscarriage and stillbirths in pregnant women.

Mrs Mahama said the fact that malaria remained the main killer of children meant there was more work to be done, despite the various interventions to contain the disease.

She said the government, aware of the dangers of malaria, had removed taxes on all imported mosquito nets and other malaria-related commodities.

Those measures, she said, were expected to augment the various activities and measures that had already been undertaken to ensure that the effect of malaria was reduced considerably.

“We must invest more in malaria prevention and I am happy the President is committed to allocating more resources to the fight malaria,” Mrs Mahama said.

The Minister of Health, Ms Sherry Ayittey, said April 25 had been set aside as a day for unified commemoration of global efforts to combat one of the world’s most dreaded diseases because of its impact on the economic development and health of countries.

She expressed her appreciation to the development partners and all those who had worked tirelessly on malaria control.

The American Ambassador to Ghana, Mr Gene A. Cretz, said the United States and Ghana were investing in the health of Ghanaians and achieving great results.

He said through the President Obama Malaria Initiative (PMI), over $136 million had been invested in combating malaria in Ghana.

In 2012, the US invested $32 million towards the promotion and distribution of mosquito treated nets in Ghana.