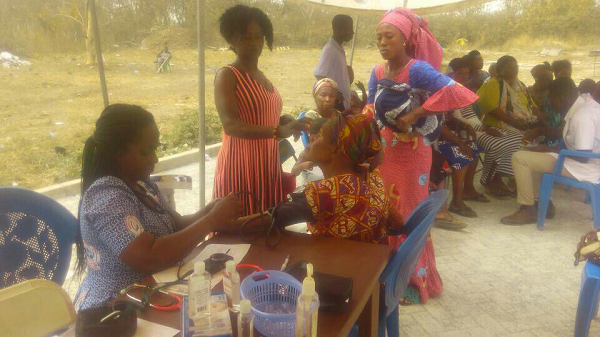 Some of the beneficiaries going through the screening
30.5k Shares

More than 3,000 people in the Techiman Municipality and its surrounding communities in the Brong Ahafo Region have benefited from a five-day free health screening and treatment exercise organised by the Mid-North Conference of the Seventh Day Adventists (SDAs) at the Valley View Adventist (VVA) Hospital in Techiman.

A 17-member medical team made up of medical doctors, dentists and nurses from the United States of America (USA) and Mexico assisted the medical team at the hospital in carrying the exercise.

The exercise followed an appeal made by the President of the Mid-North Conference of the SDA, Pastor Dr Paul Amo Kyeremeh, to assist the municipality with health screening and treatment exercises to curb unnecessary deaths and the spread of diseases in the area.

Pastor Dr Kyeremeh said he made an appeal to a US-based foundation called “Faithful Path Ministries (FPM)” to come to the area to screen and treat the residents to prevent unnecessary deaths.

Briefing the media at the end of the exercise, the President of the FPM, Dr Dona Cooper-Dockery, said glaucoma, breast, prostate and oral cancers, high blood pressure and liver problems were very high in the region.

“The increasing number of eye problems and diseases in the region is because of the inadequate ophthalmologists to diagnose people with eye diseases”.
We have seen hundreds of people with different types of eye diseases and glaucoma,” she stated.

Dr Cooper-Dockery disclosed that the medical team had also seen a lot of people with symptoms of breast, stomach and prostate cancers, malaria and typhoid fever, among other diseases.

According to her, all the doctors were very busy throughout the five-day exercise because of the number of complications and surgeries the various medical teams performed.

Dr Cooper-Dockery said some of the people came with preventable diseases that had developed into complications due to ignorance and lack of regular medical check-ups.

Dr Cooper-Dockery mentioned breast and prostate cancers as some of the diseases that could be prevented or cured when detected early and advised the public, especially women, to constantly visit health facilities for screening.

She said diabetes and high blood pressure were silent killers, emphasising that they could, however, be controlled through early detection and education.

Dr Cooper-Dockery observed that the average life expectancy for persons in Ghana was 64 years because of the inability of the country’s health facilities to educate and advise people on how to live healthy lifestyles and how to prevent diseases.

An ophthalmologist, Dr Javier Castillo, said he detected several eye problems among the people he attended to, explaining that the infections could have been prevented.

According to him, a common eye problem in the region was glaucoma and wondered why people could get blind as a result of such a treatable disease.

He, therefore, called for regular check-ups to avoid such conditions.