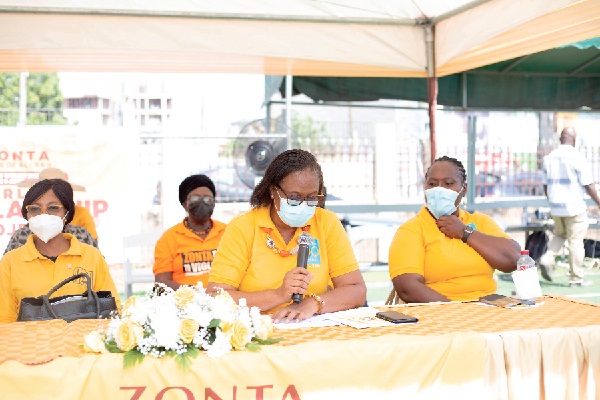 The Zonta International Accra Club II has held a graduation ceremony for 11 girls who have successfully completed their basic school education under the organisation’s scholarship project.

Certificates were awarded to the selected girls and heads of the various schools for the successful completion of their basic school education.

The past President of the Zonta International Accra Club II, Mrs Rachel Baddoo, in her speech, stated that the club was glad to celebrate their fulfilled mission in successfully graduating the girls from JHS.

She revealed that the girls were not only supported in their education but were introduced to reading engagements and Spelling Bee and also paid visits to some institutions including Nestle Ghana to broaden their knowledge.

The girls were also given training and advice on child marriage prevention.

Mrs Baddoo further noted that the club had plans to continue with the sponsorship project and support girls to the senior high school if they qualify.

“We shall consider identifying another set of girls from other schools to go through their JHS education,” she added.

Some parents and teachers of the girls who were selected for the scholarship project expressed their gratitude to the club for the enormous support for their children’s basic school education.

In an interview with the Daily Graphic, some students of the project also expressed their gratitude to the club and implored the club to do more for other girls in different communities.

The Zonta International Accra Club II girls scholarship project was initiated in the 2015/2016 academic year with girls in primary class one, three and four in the Greater Accra Region.

In all, 15 girls who lived in socially and financially deprived conditions were selected based on their academic performance.

The club provided the girls with books, uniforms and some incidentals such as tuition fee and extra classes.

The club also organised monitoring and coaching visits to the schools where the selected girls come from to see to their welfare, school work, and their plans for higher education and future careers.

The co-Chairperson, service committee for Zonta Club Accra II, Mrs Ethel Buah in her closing remarks, advised young girls to take care of themselves, especially within the period after their basic school examination.

She charged the girls to be vigilant and stay away from pre-marital sex, which might lead them into teenage pregnancy.

Mrs Buah further encouraged the girls to be a mouthpiece for the club and advise other young girls to make their parents and the country at large proud.