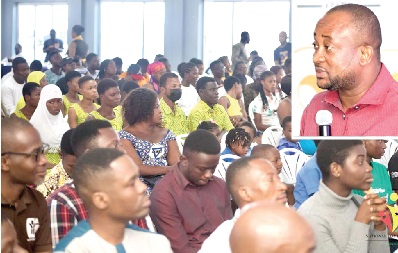 The National Youth Authority (NYA) is to develop a framework to incentivise volunteerism in the country.

The measure is also aimed at integrating programmes to make volunteerism attractive to the youth.

The Chief Executive Officer of the NYA, Pius Enam Hadzide, announced this at the maiden celebration of International Volunteer Day (IVD) in Accra yesterday.

It was on the theme: “Solidarity through volunteering”.

Mr Hadzide acknowledged the fact that volunteerism had declined in the country, and that recognising the effort of volunteers would motivate and drive the youth to willingly contribute to national development.

It charges governments and other stakeholders to acknowledge volunteerism and its impact on development.

Although the day had been commemorated by UN member countries across the world, yesterday was the first time the country had joined in the commemoration.

It was meant to heighten awareness of the important contribution of volunteers and also stimulate more people to offer their services, both at home and abroad.

In attendance were policy makers, representatives of development partners, youth groups, local and international organisations, pupils and some volunteers from across the country.

There was a panel discussion on the contribution of volunteers to attaining the UN sustainable development goals and gaps in terms of data and evidence, private sector engagement and the future of volunteering.

Mr Hadzide said the NYA was mandated to facilitate youth development, including stirring up the spirit of volunteerism in young people.

In line with that, he said, his outfit had introduced a National Youth Volunteer Programme (NYVP), which would inculcate the spirit of patriotism, nationalism and community service in the youth.

He said it would also enable young people to offer voluntary services in various communities under modules such as youth development, education, gender mainstreaming, infrastructure, among others.

"Volunteers offer skills while expanding their own know-how; they empower communities while earning a sense of personal fulfilment at having made a difference in our world.

“Volunteering is where compassion meets solidarity," he added.

The Second Counsellor at the Rwandan High Commission in Ghana, Theophile Rurangwa, said majority of people in Africa were young, and that it was important to inculcate the spirit of volunteerism in them.

He said celebrating and honouring volunteers were essential, since they dedicated their skills, time and efforts to serving humanity to make the world a better place, adding: "We say thank you to all volunteers across the world for your efforts."

The Programme Manager of the Youth Fellowship Programme at the UN Population Fund (UNFPA), Micheal Opeyemi Ige, commended youth volunteers from Ghana who were serving people across the world.

He said some volunteers served in difficult situations and, therefore, needed to be recognised because "without their commitment, dedication and sacrifice, the world would have been worse off than it is today”.