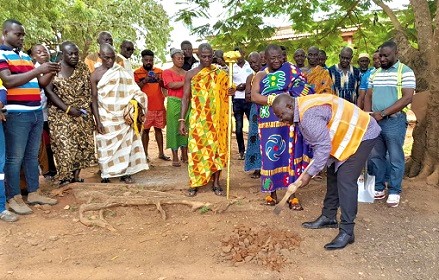 John Osei Frimpong (with pickaxe), Member of Parliament for New Abirem, digging the ground for the commencement of work on the 64-lockable stores at New Abirem. Looking on are the Abiremhene, Obrempong Akwasi Amo Tweretwea (middle) and other officials of the assembly.
30.5k Shares

A sod-cutting ceremony for the construction of four social amenities in four towns within the Birim North District in the Eastern Region has been held.

The projects are 32-lockable stores at Afosu at a cost of GH¢1 million, another 64-lockable stores valued at GH¢3 million at New Abirem, 12-market sheds at Nkwateng which cost GH¢220, 000 and a GH¢500,000 16-seater water closet attached to the New Abirem Government Hospital being funded by the District Assemblies Common Fund (DACF).

The 12-market sheds at Nkwateng which cost GH¢220, 000 and being funded by the District Development Fund (DDF) is expected to be completed within three months.

These projects were the initiatives of the Birim North District Assembly and the Member of Parliament of the area, John Osei Frimpong, with the support of the traditional rulers within the district.

At a ceremony at New Abirem for the commencement of work on the projects, the District Chief Executive (DCE), Remond Nana Damptey, said since 2017 all projects which were executed in the district had been completed and the contractors fully paid.

According to him, since revenue collected by the assembly were being judiciously used to finance the construction of social amenities, the people within the district were always willing to contribute their quota through payment of levies.

Nana Damptey urged the construction firms executing the new projects not to do shoddy works since it was the taxpayers money that was being used to pay for the projects.

He assured the people within the district that the construction of additional social amenities would be undertaken before the end of 2024.

The MP asked the construction firms executing the projects to at least engage 70 per cent of the youth within the four towns.

That, he indicated, would enable the unemployed youth in the area to also generate income for their livelihoods.

The youth to be engaged, the MP cautioned, should be punctual at work and refrain from negative acts.

Mr Frimpong was happy his partnership with the assembly had witnessed unprecedented levels of infrastructural development such as classroom blocks, roads, mechanised water systems and electricity among others.

The Abiremhene, Obrempong Akwasi Amo Tweretwea I, who was highly elated by the projects, was hopeful that the indigenes who, according to him, were involved in trading would benefit from the lockable stores.