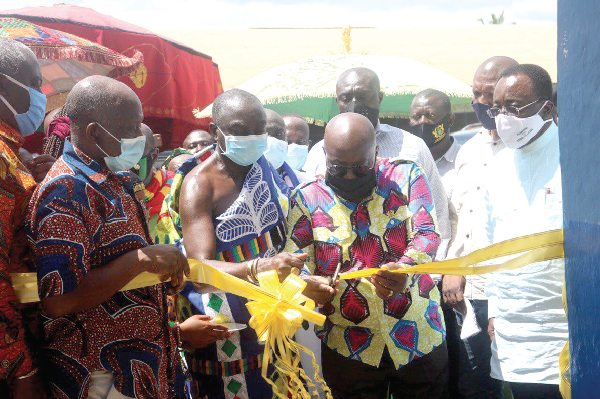 President Akufo-Addo (2nd right), being assisted by the Juasohene, Nana Asafoakwaa Adjei Tabi I (In Kente), to cut the tape to inaugurate the block. Among those with them is Mr Simon Osei-Mensah (left), the Ashanti Regional Minister. Pictures by EMMANUEL BAAH
30.5k Shares

President Nana Addo Dankwa Akufo-Addo has assured the people of the continued support of the government to address the challenges they encounter in their respective communities to improve lives.

According to him, he had been able to fulfil most of the promises he made in the run-up to the last elections and, therefore, “I am asking you to judge me by my work and reward me with another term in office”.

He said this year’s elections were not about promises but the continuation of the good works of the government to improve the lives of the people.

At Nhyiaeso, the President inaugurated a six-unit classroom block and four-bedroom quarters for national service persons at the Apraman MA Basic School.

The facility also has a head teacher's office, a kitchen, a dining hall, a well-stocked and furnished ICT laboratory, a library and a mechanised borehole.

It was built by the Chief Executive Officer of Beauty Queen Hotel and Restaurant, Nana Adwoa Dokua, as her 60th birthday gift to the community.

At a durbar in his honour at Apraman, the President commended the benefactor for investing in the future of the community.

He said the government would continue to provide the needed support and enabling environment for the private sector to thrive to contribute to the development of the country.

Nana Dokua, who is a board member of COCOBOD, explained that during her 60th birthday celebration in 2018, she decided to embark on the project after approaching the headteacher of the school, who requested for accommodation for national service persons posted to the school.

Besides that, she said, during a visit to the school, she saw the pupils eating in classrooms due to the non-availability of a dining hall.

She, therefore, decided to build the facility to commemorate her birthday and also contribute to the development of the community that had hosted her for the past 25 years.

At Juaso, the President inaugurated a 12-unit classroom block for the Juaso Senior High and Technical School.

He promised to tackle the road linking Bompata to Juaso following a request from the Chief of Bompata, Nana Effah Appenteng.

President Akufo-Addo also inaugurated a 12-unit classroom block for the Konongo-Odumase Senior High School and inspected ongoing works on a boys’ dormitory in the school.