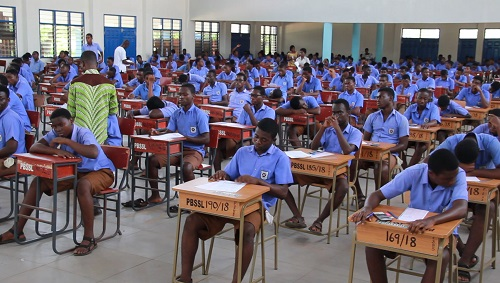 The West African Examinations Council (WAEC) has admitted that one of papers in the ongoing West African Senior School Certificate Examination (WASSCE) leaked minutes before it was written.

In addition, a list of a yet-to-be-finalised version of an examiners’ list for the examination was put on social media.

It mentioned Mathematics (Core) 2 Paper as the paper that leaked but explained that the questions were posted on social media platforms after the release of the papers from the WAEC strong rooms.

The Head of National Office (HNO) of WAEC, Mrs Wendy Enyonam Addy-Lamptey, briefing the Daily Graphic today, Wednesday, said it had instituted investigations into the leakage of the paper.

With regards to the examiners list, she said “the disturbing development” had been reported the matter to the Cyber Crime Department of the Ghana Police Service.

Mrs Addy-Lamptey stated that the council’s monitoring of the WASSCE indicated that the widespread activities of rogue websites were in full force with fake versions of questions being circulated on various social media platforms as authentic.

She displayed some of the fake versions of the Integrated Science (2&1), Social Studies (2&1), Chemistry (3), Practical Alternative A, and Economics (2&1) papers, which were in circulation on social media platforms as compared to those written.

The HNO described as worrying the activities of the operators of such rogue websites, which had lots of student followers and were therefore, in a position to deceive students and some members of the general public to part with handsome cash for those fake papers.

She assured all stakeholders and the members of the public that the council’s marking process, which had been tested over the years ensured fairness and had a rigorous process, which would make it difficult for an examiner to be compromised.

Mrs Addy-Lamptey added that unlike examiners who carried scripts home to mark, the cross-checking of scripts was done under supervision by venue co-ordinators and subject officers at designated venues.

She said apart from revising the list of the yet to be finalised examiners, the elaborate checks and counter-checks as part of the council’s procedures, “will ensure the leak does not compromise our marking.”

The HNO apologised unreservedly to all examiners whose contact details were inadvertently circulated in the public domain, reiterating the council’s commitment to safeguard the integrity and credibility of its examinations and certificates respectively.

Mrs Addy-Lamptey gave the assurance that the council would continue to roll out various measures to deal with those illegal activities in order to ensure fairness to all candidates and maintain the integrity of examination.

The HNO reminded the candidates that there was no short cut to examination success and advised them to desist from such external assistance because such acts could jeopardise their future.

She appealed to all stakeholders, particularly the supervisors, invigilators and the security officials detailed to the various examination centres to exhibit the highest professionalism in carrying out their respective responsibilities.

Reacting to calls for the Mathematics Core Paper to be cancelled, she explained that the council did not just cancel an examination paper, but did so on the advice of the Ghana Examinations Committee, Chaired by the Director-General of the Ghana Education Service (GES) with institutional representations.

Mrs Addy-Lamptey mentioned that other notable high profile personalities on the committee included the Registrar of WAEC, the HNO of WAEC, the Executive Secretary of the National Inspectorate Board (NIB), the Deputy Director-General of the GES in charge of Quality and Access, the Executive Secretary of the National Council for Curriculum and Assessment (NaCCA) among others.

She explained that WAEC, as a body, could not take any unilateral decision without the express approval of the committee, describing the call as misplaced, “because we only implement the decisions of the committee.”