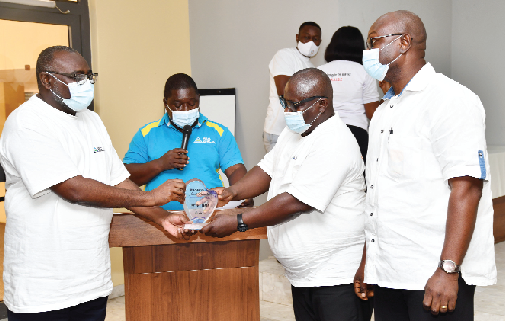 The Chief Executive Officer (CEO) of the Volta River Authority (VRA), Mr. Emmanuel Antwi-Darkwa, has said the insurgence of separatist groups seeking a breakaway from Ghana has made physical security a very critical situation for the authority and its subsidiaries.

He said those separatists recently attempted to launch an attack to breach the security at the Kpong Generation Station in order to capture the Akuse Plant.

"That development caused management to scale up security at the installation. This phenomenon makes it even more compelling to develop a common approach and methodology which set the path to building sustainable protection against physical and cyber attacks of our installations,” he said.

Mr. Antwi-Darkwa said this in a speech read on his behalf at the VRA Safety Awareness Day in Accra yesterday.

The event, held on the theme: "Managing cyber and physical security: A key requirement of our sustainability plan", was aimed at promoting staff involvement in the performance safety and awareness creation in cyber security threats.

It also formed part of the VRA’s sustainability plan, which seeks to sustain its economic growth and environmental and social responsibility, with the conscious effort at reducing the dependence on localised facilities and migrate to a cloud-enabled information technology (IT) infrastructure.

Various departments within the authority that adhered to work area safety standards were honoured, with a former Deputy CEO in charge of Services, Mr. Kofi Ellis, being honoured for promoting safety practices in the company during his tenure.

Audit of IT infrastructure

Mr. Antwi-Darkwa said currently, cyber threats had become even more pronounced, as the world battled the effects of the COVID-19 pandemic on global health and socio-economic and political systems.

He said the pandemic had resulted in increased reliance on digital tools, as the normal work culture had shifted to remote working in order to accomplish daily routines, thereby exposing the VRA to the threats of the digital space.

“Today’s society has new challenges of protecting critical points of cyber vulnerabilities, as the number and intensity of cyber attacks keep rising at incredible speed rates,” he said.

As part of its sustainability plan, he said, the VRA management, in January 2020, applied part of the company's internally generated funds to carry out an audit of its IT infrastructure and resources.

“This was done by inviting proposals from qualified consultancy firms to undertake a diagnostic study of our IT infrastructure and provide recommendations to enhance our business and corporate strategy.

“It was carried out with the view to providing management with an independent professional view of the short, medium and long-term strengths, weaknesses, opportunities and threat analyses of the current ICT assets of the VRA and provide recommendations for management,” the CEO said.

He reminded the management of the VRA that the company was a critical information infrastructure (CII), and that any attack on its installations could have dire impact on national security, the economy, public health and safety.

He, therefore, advised the management to prioritise investments and resources in cyber security programmes and initiatives, as well as safeguard sensitive information.

“You must put in place measures to prevent data loss, financial loss, operational disruption, loss of lives, as well as prevent negative effect on the economy,” he suggested.