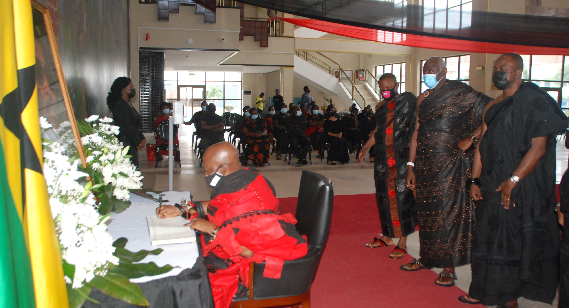 Ogyeahoho Yaw Gyebi II, President of National House of Chiefs signing the book of condolence for late Flt Lt Jerry John Rawlings. Looking on are some members of the house of chiefs.

The National House of Chiefs (NHC) has called on all Ghanaians to work towards making this year's general election peaceful in honour of the late former President, Flt Lt Jerry John Rawlings.

That, the chiefs said, would be a befitting send-off for the former President who ushered in the Fourth Republic, the longest lasting republican period currently being enjoyed by Ghanaians.

The President of the NHC, Ogyeahoho Yaw Gyebi, said this during an interaction with journalists when he led a delegation of chiefs to sign the book of condolence opened in memory of the late former President Rawlings at the Accra International Conference Centre yesterday.

Yesterday, heads of institutions and members of the public were given the opportunity to sign the book of condolence.

Ogyeahoho Gyebi, who is the Paramount Chief of the Sefwi Anhwiaso Traditional Area, said Ghana had lost a great pillar who had contributed so much to the development of the country after ruling for 19 years.

“We all remember J.J. Rawlings handed over power after 19 years, especially after his two terms in office. This does not often happen in Africa and so we are very much grateful to him,” he said.

On the elections, Ogyeahoho Gyebi said there would be only one winner, and that whoever would lose should be gracious enough to congratulate the winner, saying: “I, therefore, urge all to preach peace during this mourning period. It will not be proper during Rawlings’s bereavement to hear or see people fight here and there.”

He said the peace should be maintained before, during and after the elections.

“Former President Rawlings was a giant in African politics. His tenure as the leader of the country remains emblematic, with the restoration of Ghana to democratic rule, and even after exiting power, Rawlings stood tall for African unity and renaissance,” he said.

“Ghana and the entire African continent will surely miss the sterling qualities of the great and charismatic leader,” Ogyeahoho Gyebi added.

In separate interviews, they extolled the contributions of the late former President to the country’s development.

Rt Rev. Osabutey said the former President was a selfless person who thought less of himself, as he was concerned about the welfare of the ordinary man.

According to him, Mr. Rawlings saw leadership as service to mankind, saying that the late former President did that, irrespective of the stature of a person in society.

Dr. Bomdande, who was the Executive Director of the West African Network for Peacebuilding (WANEP), said the late Rawlings took Ghana from the lowest ebb of development to the level of a modern country.

Mr. Yieleh-Chireh said he believed that the name Rawlings would be on the lips of Ghanaians for a long time in view of his role in nation building.

For her part, Ms. Biyira described Mr. Rawlings as a great charismatic leader and legend, saying he would be missed.

Mr. Asaga, who said Mr. Rawlings was his former boss and friend, insisted that the University for Development Studies should be named after him as a result of his involvement in its establishment.

He ruled the country from 1981 to 1992 as Chairman of the Provisional National Defence Council (PNDC) and from 1993 to 2000 as a democratically elected President.

Following his death, President Nana Addo Dankwa Akufo-Addo declared seven days of national mourning, with flags flying at half-mast from Friday, November 13, this year to today, in memory of the former President.

The State Protocol Department last Monday opened a book of condolence in memory of the former president.

Personalities who have signed the book so far include President Akufo-Addo, Vice-President Dr. Mahamudu Bawumia, former President John Dramani Mahama, heads of religious bodies and present and past heads of security agencies.

Members of the public have up to the close of today to commiserate with the Rawlings family by signing the book of condolence.