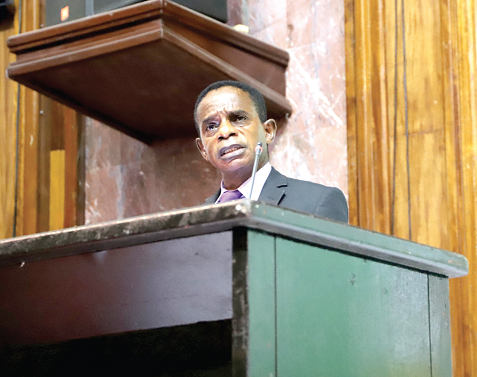 The acting Auditor- General, Mr Johnson Akuamoah Asiedu, has called on the public to volunteer information on fraud, the mismanagement of funds and other irregularities in public institutions to assist the Audit Service protect the public purse.

He said there were high expectations among stakeholders for auditors to unravel malpractices during auditing, but said that could be made possible only  with tip-offs from the public.

“As an institution going in to audit the 2020 financial year accounts, one of the challenges we shall face will be meeting the expectations of our stakeholders. In our profession, this is called the expectation gap. Sometimes a section of the public expects us to see everything they have seen or know everything they know about irregularities occurring in certain public entities. We wish we knew everything, but we do not.

“We, therefore, call on all concerned citizens of our dear nation to volunteer information when it becomes available,” he said.

The acting Auditor-General made the call at the launch of the 2020 Financial Year Audits by the Audit Service in Accra yesterday.

The launch sets the stage for external auditors from the service to commence the auditing of last year’s financial statements of public institutions across the country.

To help make the 2020 financial year audit successful, Mr Asiedu encouraged the public to take advantage of the Internet-based Citizens Eye Application to volunteer information to the service.

“In our bid to establish a communication platform with the citizenry, this App has been developed with the help of GIZ. It seeks to encourage the public to submit information on suspected cases of fraud, mismanagement, abuse and other irregularities in public offices and institutions for the service to follow up on,” he explained.

Mr Asiedu also advised officers who would be deployed to undertake the exercise to avoid conflict of interest situations, where the auditor’s personal interest interfered with or was likely to interfere with the functions of his or her office.

“This simply means auditors should avoid all relationships with managers and staff of audited entities and other parties which may influence, compromise or threaten the ability of auditors to act and be seen to be acting independently and objectively,” he said.

To avoid such situations, he asked auditors not to audit close relatives, family and friends or enemies and those against whom they might bear grudges.

“I propose that if auditors bear a grudge or harbour malice against any manager or staff of an audited entity, they should avoid auditing such entities, as the bad relationship may influence, compromise or threaten their ability to act and be seen to be acting objectively. Focus on the object and not the subject,” he said.

Mr Asiedu said challenges such as delays in getting financial statements from public institutions, failure of new boards to sign financial reports, with the explanation that they were not in office when those accounts were being prepared, and delays in responding to management letters must be relegated to the background this year.

For his part, the Director-General of the Internal Audit Agency, Dr Eric Oduro Osae, said institutions with the mandate to check corruption must put in the required efforts to enforce their laws accordingly.

“Since majority of Ghanaians (90.2 per cent of respondents in the NCCE End-line report 2021) perceive corruption as embezzlement, it is our collective effort to ensure that embezzlement is minimised to the barest minimum,” he said.

He also appealed to the Public Accounts Committee (PAC) of Parliament to invite the chairpersons of internal audit committees of entities whose heads would appear before it.

That, he said, was because it was the responsibility of the audit committees to pursue the management of covered entities to implement recommendations from Internal Audit reports, the Auditor-General and directives from the PAC.

“Therefore, if audit recommendations or directives by the PAC are not implemented, the audit committee chairmen and members cannot escape blame,” Dr Osae added.

The Chief of Staff, Mrs Akosua Frema Osei-Opare, assured auditors of the commitment of the government to check corruption in all sectors.

She said through the leadership of President Nana Addo Dankwa Akufo-Addo, many resources had been made available to institutions mandated to check corruption and promote good governance.

She urged auditors to go about their duties without fear or favour and ensure that corruption was reduced to the barest minimum in the country.