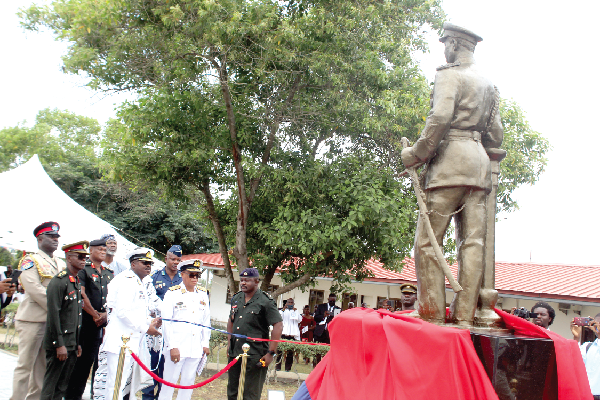 The Chief of the Defence Staff, Vice-Admiral Seth Amoama, has charged graduates of the Ghana Armed Forces Command and Staff College (GAFCSC) to let the knowledge they have acquired at the institution to yield excellence and dedicated services in whatever capacity they find themselves.

According to him, studying at the institution, mistakenly seen as being hostile and intimidating, was no mean an achievement, hence the need to demonstrate knowledge wherever they would be.

Vice-Admiral Amoama gave the charge at the Graduation Religious Parade for Senior Command and Staff Course 43 and Master of Science in Defence and International Politics Class of 2022 at the GAFCSC yesterday.

As part of the event, the CDS also unveiled an eight-foot statue of the late Lieutenant General J. A. Ankrah, a former Head of State (1966-1968).

The statue was donated by the family.

Vice-Admiral Amoama said the GAFCSC was noted for high standards and, therefore, the graduands owed it a duty to ensure that their output in future deployment reflected the standards expected of products of the college.

He said they would also be expected to appreciate the roles of the GAF and the ever-increasing need for cooperation between the military and the civilian authority.

“I sincerely believe you should be thankful for the opportunity to enrol in the Master of Science degree in Defence and International Politics programmes successfully. It is no mean achievement, especially studying in an environment mistakenly considered by many as hostile and intimidating.

“I believe you found the environment very friendly and accommodating and have made some good friends. While congratulating you on taking such a bold step, let me also admonish you to let the knowledge and exposure you have gained yield excellence and dedicated service to our dear nation in whatever capacity you find yourselves,” he said.

Vice-Admiral Amoama appreciated the generosity of the Ankrah Family to donate the statue that was mounted in his honour.

In the case of Dr Kumi-Ansah Koi, who was honoured for 40 years of service to the college, the CDS said: “You have made an indelible mark at the GAFCSC, both with your commitment and your selfless sacrifice. Your association with the college since 1982 deserves special recognition.”

A former Moderator of the Global Evangelical Church, the Very Rev. Ferdinand Hope Gbewonyo, charged the graduands to serve with integrity wherever they found themselves.

The Chief Imam of the GAF, Lt Col N. A. Mohammed, entreated the graduands to listen to their consciences in order to serve with integrity.

The Assistant Commandant, Senior Division of the GAFCSC, Air Commodore Eric Yirenkyi, said the “decision by the Military High Command to site (Ankrah’s) statue in this college is in line with an earlier decision on October 1, 1976 to name a hall in this college after the distinguished General”.

The acting Head of the Mantse Ankrah Royal Family and the Pedro Nii Kpakpo Oti Ankrah Family, Dr Mark Ankrah, thanked the college and the government for the honour done the family.