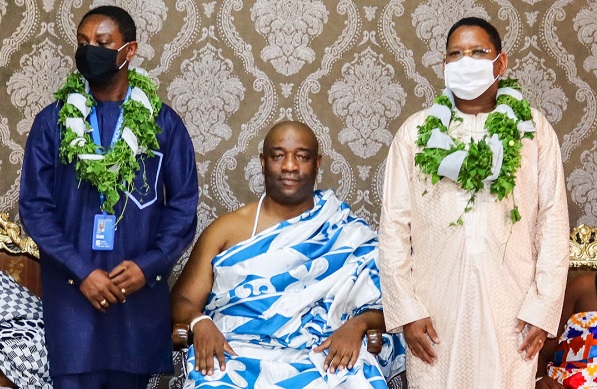 The head of office and UNESCO country representative Abdourahamane Diallo has paid a courtesy call on the Ga Mantse, Tackie Teiko Tsuru II to express gratitude and show appreciation for his support towards UNESCO in the past.

In his address, Mr Diallo said that the Ga Mantse's support for education and science has been remarkable.

He further acknowledged the Ga Mantse's role in the preservation of Ga culture and took advantage to seek support for UNESCO in this regard.

Pledging his support to the delegation, King Tackie Teiko Tsuru II emphasised the need for a partnership to revive the Ga Damgbe kingdom.

He said the Ga Damgbe girl-child continues to be an endangered species and a collaboration between the Ga Kingdom and UNESCO could help in her rescue.

King Tackie Teiko Tsuru II, took the opportunity to initiate the delegation into the Ga State by hanging the sacred hyssop over their necks.