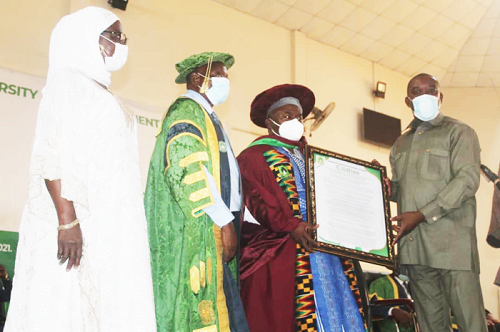 The University for Development Studies (UDS) has conferred an honorary doctorate degree on the immediate past Chief Executive Officer (CEO) of Stanbic Bank, Naa Alhassan Adani, for his services to humanity and contribution to the development of the university and the Northern Region at large.

A citation accompanying the award described Naa Andani, who is the Chief of Pishigu in the Northern Region, as “a visionary, courageous, transformational, exemplary leader, economic and cultural development high achiever and distinguished reformer”.

The Chairman of the Governing Council of the UDS, Professor Wayo Seini, decorated Naa Andani with the honours last Saturday at the 22nd Congregation of the university at Tamale.

Some 7,293 students were awarded with postgraduate and undergraduate degrees, as well as diploma certificates in various academic disciplines at the event.

Prof. Seini congratulated Naa Andani on the honorary doctorate degree and said the conferment upon the former Stanbic Bank boss was apt, considering his contribution to the development of the region and the country.

“His contribution to the development of UDS and the region cannot be underestimated. His late brother who was the Paramount Chief of Sagnarigu allocated vast land for the establishment of the university,” Prof. Seini added.

He also commended Naa Andani for his efforts to promote education in the region, revealing that an educational fund set up by the former CEO of Stanbic Bank at the university few years ago had benefited some brilliant, needy students who had challenges in paying their fees.

In his acceptance speech, the Pishigu Naa thanked the university for the honour done him and expressed his commitment to continue to champion the development of the area.

He said the UDS had lived up to its expectations since its establishment and must be supported in various ways to do more for the transformation of the country.

He presented a cheque for GH¢100,000 to the educational fund he set up in the university to support brilliant, needy students.

Naa Andani is an economist and grandson of Naa Andani who ruled Dagbon in the colonial era.

He is a former President of the Ghana Association of Bankers.

On May 14, 2018, he was enskinned as the chief of Pishigu in the Northern Region with the stool name Naa Alhassan Andani.