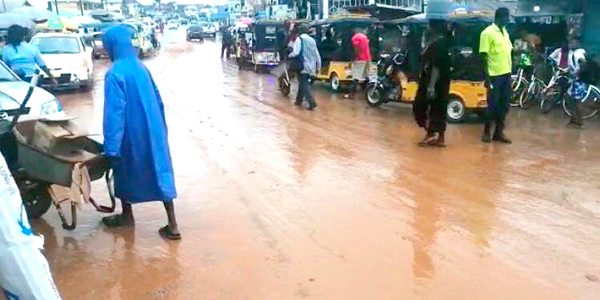 It is all muddy in the Twifo Praso township when it rains
30.5k Shares

Residents of the Twifo Atti Morkwa (TAM) District of the Central Region have called on the government to expedite work on road construction projects in the district.

They, particularly, stated that the government must speed up work on the various road projects to ensure foodstuffs from the hinterlands do not go to waste but the district is opened up for economic activities to thrive.

While commending the government for the work done so far on the Twifo Praso-Dunkwa Offin road and the Twifo Praso - Assin Fosu road, they said that work must be sped up on this and other road projects being undertaken in the district.

A driver, who plies the Twifo Praso-Assin Fosu road, Dacosta Kumi, said though work on the road had significantly improved there was a lot more work to be done.

“Before the construction work began, we could not move when it rained. At a point the driver unions had to poll resources to make the road motorable but now the story is different, the road has improved significantly but there is still work to be done,” he said.

Mr Kumi noted that the Awroso-Adiembra section of the road on the Twifo Praso-Assin Fosu road was still in a deplorable state.


A station master with the Ghana Private Road Transport Union (GPRTU) Branch Number 5 at Twifo Praso, Andrews Brobbey, urged the government to ensure that contractors were on site to speed up work.

A transport officer, Mutalla Mohammed, also called for work on the Kyeaboso-Hasowodze road to be expedited.

The commercial drivers, who spoke with the Daily Graphic, commended the government for work done on two major roads in the district which had reduced travel stress and time.

According to some of the drivers, travelling time from Twifo Praso to Assin Fosu had reduced by about an hour.

“Before the construction works, it could take drivers two and a half or three hours to get to Dunkwa on Offin. The road was rocky and stressful to travel on. Now the culverts and bridges are being done and now you can get to Dunkwa in two hours,” he stated.

He also commended the assembly for work on the Twifo Praso-Opokukrom-Bemponegya road, which is also under construction.
The District Chief Executive for TAM, Robert Agyeman Nyantakyi, said the Ateiku-Bonsaho, Ateiku-Nyansi Junction and Ayaase-Agona road construction had stalled, making them unmotorable, while contractors had severally said they were going to mobilise resources for the continuation of the projects.

Food basket
Mr Nyantakyi noted that the district was a huge agricultural basket for the region and country, saying good roads were needed to enhance economic activities and boost trade.
The Paramount Chief for Twifo Atti Morkwa, Nana Kwesi Kenin, appealed to the government to extend the road construction to communities including Mampongmaa, Mintahso and also look at the Agona-Assin Awesam road.