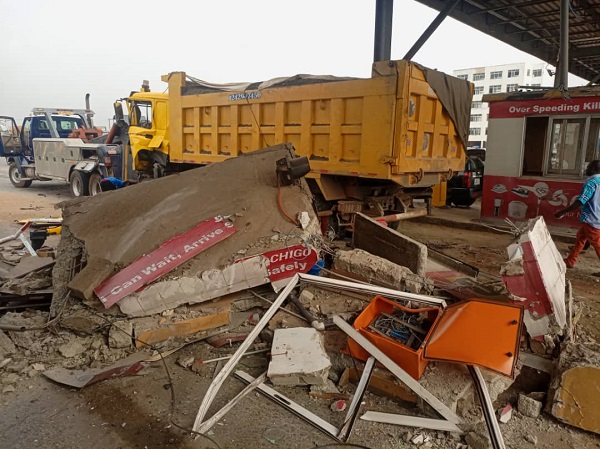 It has now emerged that one person died while six others suffered injuries when a tipper truck with registration number GG 3542- 20 on Monday morning sped into one of the tollbooths at the Tema-Accra end of the Motorway.

The accident occurred at about 6:30 am when the truck heading towards Accra from the Tema section crashed into one of the six booths damaging the structure. Initial reports had indicated at least four attendants were injured and had been rushed to the Tema General Hospital.

The truck was suspected to have lost its brakes and slammed into one of the booths.

Graphic Online understands that one of the victims, Isaac Koomson, 56, who suffered severe injuries, later passed on at the Tema General Hospital.

Aside from the damage caused to the tollbooth, two vehicles including a saloon car with registration number GT 469-10 whose driver and a passenger also sustained some injuries, were damaged beyond repairs.

Read also: 1 dead, 6 injured as truck crashes into a toll booth at Tema