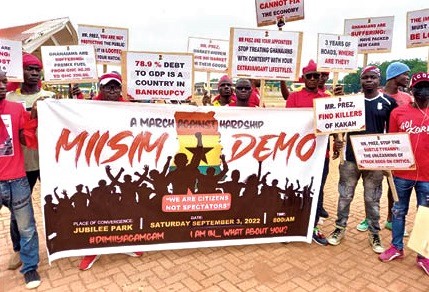 Some of the demonstrators with placards
30.5k Shares

Hundreds of residents of Tamale in the Northern Region last Saturday hit the streets to register their displeasure with what they described as “economic hardship and mismanagement” of the country.

The peaceful demonstration, dubbed : “miisim demo” to wit hardship, was to draw the attention of the government to the current economic hardship in the country.

Holding placards with inscriptions such as “President Akufo-Addo has failed us”, “Ghanaians are suffering, do something”,

“Farmers can no longer buy fertiliser” among others, the demonstrators walked through the principal streets of Tamale before converging on the Jubilee Park to address the media.

The protest march was organised by a group calling itself the Coalition of Progressive Forces on the theme : “we are citizens not spectators”.

Addressing the media after the protest, one of the convenors of the demonstration, Professor Jaspa Ayelazuno, said the demonstration was aimed at bringing the attention of government to the numerous challenges confronting the nation for immediate redress.

He indicated that it also sought to highlight grievances of “misgovernance and mismanagement of the economy on specific issues such as: unbearable costs of food, fuel, electricity, transportation, water, rent, high cost of farming inputs (fertiliser, seeds, tractors, etc).”

He noted that prior to the 2016 general election, the New Patriotic Party (NPP) promised Ghanaians good living, but it was now doing the opposite in power.

Prof. Ayelazuno called on Ghanaians not to leave the responsibility of putting the government on its toes to only the opposition National Democratic Congress (NDC) and the Minority group in Parliament, but speak up to drum home their concerns.

For his part, the Northern Regional Secretary of the NDC, Mohammed Abdul Salam, blamed the current economic situation on the what he described as “failure of the NPP government to live up to expectation”.

He, therefore, urged Ghanaians to rally behind the NDC to enable it to rescue them from the shackles of the NPP.

Some of the demonstrators, who spoke to the Daily Graphic, said they participated in the protest because they were bearing the brunt of the current economic condition.

The exercise was initially scheduled for last month but it was postponed to last Saturday following the death of the Northern Regional Chairman of the NDC and Chief of Tugu-Yepala, Naa Ibrahim Mobila, and the Paramount Chief of the Mion Traditional Area, Naa Abdulai Mahamadu V.