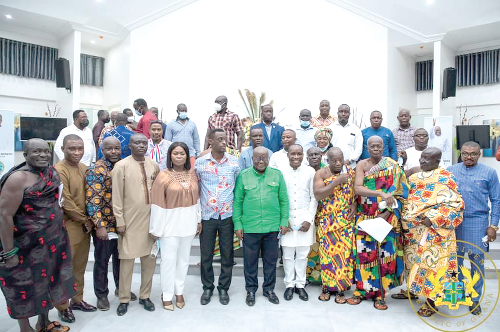 President Akufo-Addo (middle), with some of the chiefs and members of his entourage

President Nana Addo Dankwa Akufo-Addo has entreated chiefs, religious and opinion leaders to add their voices to calls on the people to avail themselves of the COVID-19 vaccine to protect them from contracting the disease to curb its spread in the country.

“It is important to note, from available data, that about 98 per cent of reported COVID-19 cases are those who have not been vaccinated. Clearly, for a layman like me, it tells me that the vaccine helps in providing some protection against the dreadful disease, and as we make the effort to get more vaccines, there is the need for people to avail themselves to get vaccinated,” he said.

The government is expected to receive between four and five million doses of the vaccine by the close of September as part of efforts to meet its target of vaccinating about 20 million people by December 2021.

The President was addressing the Nzemamale Council of the Jomoro Traditional Area in the Ellembele District in the Western Region as part of his two-day tour of the region.

“Nevertheless, now that more and more vaccines are being made available, our target is to vaccinate more than 20 million people by the end of this year. Let me assure you that no one will be left out; we will make sure the entire population is vaccinated; we are determined to vaccinate all,” the President said.

President Akufo-Addo further said with more vaccines coming from countries such as the United States, Britain and Germany, “I can assure the chiefs and the people of the Western Region and other parts of the country that they will have their turn”.

According to him, the government was committed to the fight against the virus and, therefore, urged people not to politicise the vaccination exercise, since it was for the national good.

The President said considering the COVID-19 pandemic profile of the country, there was no doubt that the disease was prevalent in urban communities, for which reason those hot spots were being given priority in the vaccination exercise.

He said part of the lessons learnt from the outbreak of the pandemic was the need to begin the production of vaccines in the country.

In furtherance of that, he said, a vaccine manufacturing committee had been set up to begin the process, adding: “We have to do it, and we will do it.”

The Western Regional Minister, Mr Kwabena Okyere Darko-Mensah, commended the chiefs and the people of the region for their support in the last general election and assured them that the government would not let them down.

Speaking on behalf of the Nzemamale Council, Awulae Amihere Kpanyibli expressed appreciation to the President and the government for the support to the area so far.

He, however, urged the President to help resolve issues, including upstream oil and gas challenges, that were affecting the development of the area. and the oil and the gas sectors.