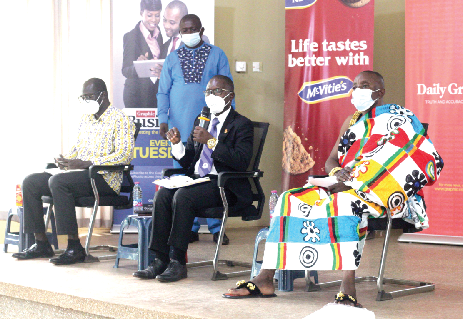 Participants at the Graphic/Zoomlion sanitation dialogue in Techiman in the Bono East Region have called for the gazetting of by-laws enacted by the various metropolitan, municipal and district assemblies (MMDAs) to make them enforceable.

They said when that was done, it would ensure that offenders were duly punished to serve as a deterrent to others.

The speakers also advocated whipping up people’s interest on issues about sanitation to complement efforts by the government and stakeholders to ensure a clean environment, adding that since sanitation was a shared responsibility, nobody must sit on the fence.

Mr Adu-Gyan observed that the poor attitude of people towards the environment was causing the country dearly and, therefore, called for a total attitudinal change towards sanitation.

“Without a change in people’s attitude, investment by the government in sanitation will come to naught. The fight to keep the environment clean requires the participation of all and sundry and not only duty bearers,” he added.

The minister also said as part of efforts to solve sanitation problems in the region, the government, in collaboration with Zoomlion, was constructing a recycling plant for the efficient management of solid waste.

The plant, he said, would also be used for the production of organic compost for horticultural and agronomical purposes.

Mr Donyina said issues of sanitation should be discussed devoid of politics since diseases did not distinguish among political colours.

Nana Boasiako Antwi, who is also the Chief of Kenten, urged chiefs to lead the crusade on environmental cleanliness.

“We cannot reach our goals if we continue to live in filth. We have the capacity to solve our sanitation problems and we have to rise up to the occasion, since our environment defines us and tells visitors who we are,” he said.

The Editor of the Daily Graphic, Mr Kobby Asmah, in a speech read on his behalf, said as part of the company's strategy to be more impactful as a business, it earmarked this year to drive awareness of and education on sanitation nationwide.

He said the Graphic Communications Group Limited was determined to sustain the campaign to help make the country clean.

“The whole goal is to complement the national sanitation campaign effort by playing our part in ensuring environmental cleanliness,” he said.

The speech, which was read by a Deputy News Editor of the Daily Graphic, Mr Kwame Asare Boadu, added that as pacesetters in the media sector, the paper would contribute its part effectively to ensure the campaign succeeded.

For his part, Dr Boateng said a percentage of hospital attendance in the region was related to malaria, diarrhoea, skin diseases and intestinal worms, which he attributed to filthy environments.

Mr Manu said 6,000 waste bins had been distributed to residents in some districts and municipalities in the region as part of Zoomlion’s agenda to distribute one million waste bins across the country.