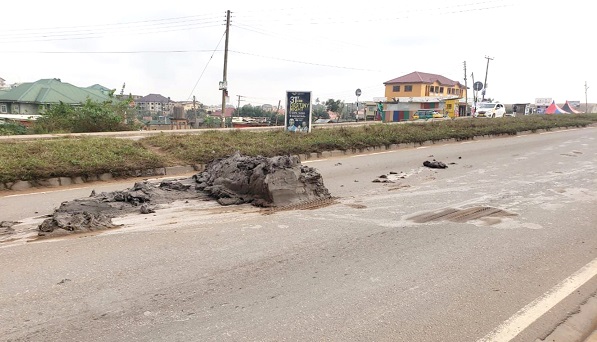 The emergence of ceramic factories to absorb the rich clay minerals of the country came as good news to districts and regions with huge deposits of the resource for wealth and job creation.

However, the unstructured and unregulated clay and sand-winning activities are now posing a serious threat to environmental safety and the road.

Shama District, is one of the 14 districts of the Western Region endowed with various mineral deposits, including gold, salt, clay, kaolin and quarry of which the quarry remains one of the most exploited until the emergence of ceramic factories and the demand for clay.

Although the demand for the minerals should come as good news to the people, on the contrary, its unguarded exploitation without permit has left the communities in the district with many abandoned pits and streets inundated with sediments of clay from overloaded trucks.

The large deposits on the road, according to stakeholders, posed serious threat to road safety and general motoring on the Accra-Cape-Coast-Takoradi Highway as drivers described the daily encounters as horrible, especially at dawn.

Currently, trucks loaded with clay are not respecting the axle road requirement; the trucks are loaded beyond their height and left uncovered.

When the Daily Graphic set out to investigate, it became obvious that, the stretch of road from Shama in the Western Region and Tema in the Greater-Accra Region where these ceramic factories are located is flooded with overwhelming quantities of clay and motorists have to be careful, especially at dawn and early mornings due to poor visibility.

In December last year, the Ministry of Roads and Highways formed a committee to deal with truck drivers who spilled pre-mixed concrete on roads.

On February 7, 2022, three persons were arrested and convicted for spilling concrete on a public road at Abavana Junction, along the Pigfarm-Kwame Nkrumah Circle stretch in Accra.

Interestingly, here in the Western Region, almost half a decade since this trouble began, the truck drivers, who inundate the streets, are yet to be identified even though there are daily and regular police patrol teams on the roads.

When the Daily Graphic contacted the Regional National Road Safety Authority, Nana Akua Ansaah Cobbinah, she said the situation was worrying and a lot needed to be done to ensure drivers whose trucks dumped clay, sand or concrete products knowingly or unknowingly were brought to book.

The Revised Road Traffic Regulation 2012 (L.I 2180), Regulation 111 (1), on the discharge of oil and other substances on the road she said, “is clear, owner of or person in charge of a motor vehicle shall take precautions to ensure that the motor vehicle does not discharge combustion products, steam, lubricating oil, or other substances on a road”.

“The law says a person who contravenes sub-regulation (1), commits an offence and is liable on summary conviction to a fine of not less than 25 penalty units and not more than 50 penalty units or to a term of imprisonment of not more than three months or both.

Mrs Cobbinah said the prevailing situation was mind bugling and that drivers, especially truck drivers who were mostly educated on these regulations were rather the perpetrators of these offences on the road which endangered the lives of other road users.

“We in the Western Region have noticed with much displeasure the happenings that contravene the road safety regulations and we are working with the police to ensure that these truckers are brought to book,” she said.

Aside from the clay, she said trucks loaded with concrete products and sand winners also discharged with impunity either oblivious of the implication or deliberately drove away disregarding the rules.

“We also have a situation where trucks loaded with sand and other quarry products are transported on our highways through villages, towns and cities without it being covered and allowing the air to carry it into vehicles following them,” she said.

“This results in blinding the drivers following them, stones from quarry products dropping from the vehicles and hitting the windscreen of vehicles following them – let me emphasise that these are all offences,” she said.

In combating the situation, Mrs Cobbinah said soon, the authority in the region would be engaging with communities along the street and get them to report drivers who dropped clay and drivers who left the content of their trucks uncovered.

“In the contemporary world, I must say that people have smartphones that could take pictures and record videos and we will want the communities to join the campaign,” she said.

“Let me say we at the road safety authority would soon come up with a reward system, where people can report these happenings on the roads for reward,” she said.

“Let me use the opportunity to advise the truck drivers that when they visit the pick up points, they should ensure that whatever they are carrying be it clay, sand or quarry products, are within the permissible limit and not to heap it beyond the size or height of the truck, it should be within limit and well covered or the law will deal with them,” She said.

One interesting thing about the mess caused by these truckers are that, after dropping these products on the streets knowingly or unknowingly – the waste is left on the street to naturally dry while some find their way into open drains or block free flow of water.

Even though the mandate of the National Disaster Management Organisation (NADMO) includes all activities from preparedness to response and recovery, prevent disasters, create awareness in prone communities and institutions on all hazard/disaster types, train and motivate the communities especially volunteers to initiate actions to prevent some of these things, they are yet to respond to this death traps on our roads.

Along the Accra-Cape-Coast-Takoradi Highway stretch are many district, municipal, metropolitan assemblies that have NADMO offices with officers – but are yet to respond or make any attempt to clear the road of the daily clay and other deposits.

Many residents the Daily Graphic spoke with, however, welcomed the reward system by the road safety authority that it would help the citizenry play a critical role in policing the road with the advent of mobile phones – recording and taking pictures.