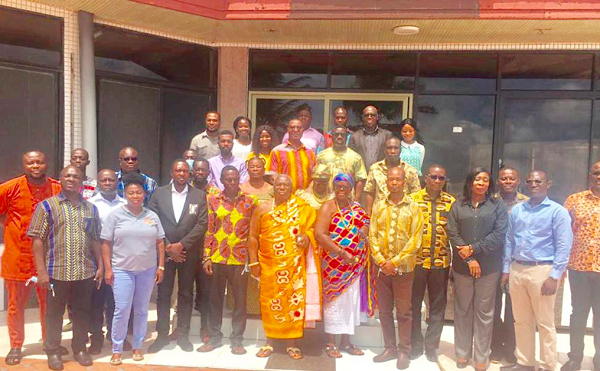 Participants in a group picture after the workshop

The Environmental Protection Agency (EPA) has begun stakeholder consultation as part of efforts to review the national contingency plan on oil spillage into one that can promptly respond to oil spillage incidents.

The Acting Director of the Petroleum Department of the Environmental Protection Agency (EPA), Mr Kojo Agbenor-Efunam, said the nation needed a national contingency plan that would enhance the agency’s ability to respond adequately to incidents of oil spillage on coastal and marine environment and reduce its impact.

According to him, such contingency plan should meet international maritime organisation conventions and other strategies that would guide the agency to promptly and adequately respond to any incident of spillage.

At a stakeholder consultation on the review of the National Oil Spill Contingency plan at Elmina last Thursday, he said although the current plan was good, there was the need to review it to meet current demands and industry trends.

The engagement was to collate inputs that would improve Ghana’s National Oil Spill Contingency Plan from relevant stakeholders
Mr Efunam urged journalists to be circumspect in their reportage regarding sensitive environmental issues.

He said it was important for the media to do away with sensational stories that could have serious implications on the populace.

“The way the media present stories about these disasters could influence public interpretation of technical details and management actions and so we are appealing that you moderately and accurately report on such issues.”

In a welcome address, the Central Regional Director of the Environmental Protection Agency (EPA), Mr Shine Fiagome, reiterated the need for the consultation, noting that it was key to getting a revamped plan that would meet changing demands.

“The consultation has been a key process of developing and updating the contingency plan which normally lead to the amendment of the document with different versions as documented in the plan to address 21st century demands”.

Stakeholders at the engagement appealed to the EPA to resolve trans border issues to build a stronger foundation that would foster a mutually beneficial cooperation between border countries.

They stressed the long-standing unresolved boundary issue which was an impediment to the progress of the country’s oil and gas industry and needed to be addressed urgently.

The Omanhen of Effutu Traditional Area, Neenyi Ghartey VII, for his part, entreated the EPA to put together an interim financial structure that would swiftly address challenges in the event of a possible spillage.

He explained that waiting on the international community for a financial bailout may wreak a further havoc due to a possible delay.