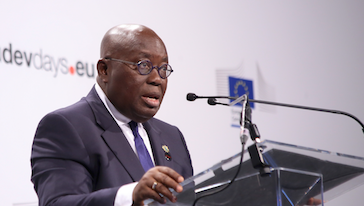 President Nana Addo Dankwa Akufo-Addo has outlined the investments his administration has made in equipping the security services over the last four years.

Speaking during his State of the Nation Address today in Parliament, the President mentioned that the investments were inspired by the recognition that peace and stability were critical to development.

He mentioned that when he took office in January 2017, the Police Service had a total of 492 serviceable cars but the government has since procured 735 additional vehicles for the Police.

Indeed, when I took office in January 2017, the Police Service had a total of four hundred and ninety-two (492) serviceable cars. Government has, since then, procured for the Police some seven hundred and thirty-five (735) additional vehicles, including fifteen (15) operational buses, a feat unprecedented in the history of the Service.

He added that the government is also constructing 320 housing units at the National Police Training School to reduce the accommodation deficits of the Service.

President Akufo-Addo also stated that two new units; an air-wing unit and the K-9 unit had been established by the Service to improve policing in the country. In this regard, he said the government had procured 4 helicopters, constructed a hangar and facilitated the training of 6 pilots to man the air-wing unit.

"The Construction of Hangers at the Police Depot, Accra, for four (4) helicopters already procured for the Ghana Police Service, is ninety-nine per cent (99%) complete. An air-wing unit has been established by the Ghana Police Service, and six (6) pilots have been trained and passed out to man the wing. A new K-9 Unit has been established with thirty (30) dogs and thirty (30) police officers," he said.

"The Criminal Investigations Department has been equipped with a digital forensics laboratory, and, for the first time in the history of the Department, crime officers are given a monthly allowance to support their investigations. We are retooling the CID Forensic Science lab; the CID building has also now become disability-friendly; and there is continuous training of CID officers".

President Akufo-Addo mentioned that the capacity of the Ghana National Fire Service "has been raised with the procurement of five sets of extrication equipment and two hydraulic platforms".

He said as part of efforts to reduce overcrowding in prisons the government is also constructing an 800 inmate capacity remand prison at Nsawam as remand prisoners will now be kept separately from the convict population. The facility is 60 per cent complete.

The President said in response to the creation of additional ranks within the military, the government reviewed salaries and allowances for Ghana Armed Forces and its civilian employees upwards effective January 1, 2020.

"Indeed, the first four (4) units of four (4) storey blocks of sixteen (16) flats under the Barracks Regeneration Project have been commissioned, and the remaining part of a forty (40) 2-bedroom self-contained accommodation units for the Six-Battalion of Infantry and AirBorne Force, in Tamale, have also been completed. Pick-ups, SUVs, trucks, high occupancy buses, ambulances and Armored Personnel Carriers (APCs) have been added to the inventory of the Armed Forces over the period, as well as the imminent completion of a Forward Operating Base (FOB) at Ezinlibo in the Jomoro District of the Western Region".