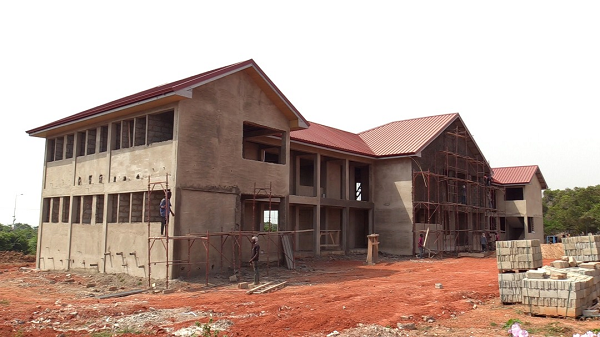 The project under construction
30.5k Shares

The construction of a transit accommodation at the Headquarters of the Southern Command, Kpeshie Ridge of the Ghana Armed Forces will soon be completed.

When completed, it will address the challenge of lack of accommodation for soldiers based outside Accra but who visit the national capital to perform official duties.

The building which will house 96 people at a time and is estimated at a cost of GH¢3 million, is the initiative of the General Officer Commanding (GOC) the Southern Command, Brigadier General Abraham Yeboah Nsiah, on May 13, 2020.

The facility contains a dining hall, ironing rooms, and washrooms with other ancillary facilities.

Brigadier General Abraham Yeboah Nsiah started the project as part of his personal contribution to augment government’s efforts in addressing the accommodation challenges facing the various barracks across the country.

Briefing the media on Friday, January 29, 2021 on the progress of the project, the Public Relations Officer (PRO) of the Southern Command, Major Berlinda Amarteifio said the building will serve as a transit quarters to accommodate personnel from units outside Accra whenever they come to Accra for official duties.

She explained that personnel who come from units outside Accra for training purposes, ceremonial duties, escort duties and other official assignments, encounter challenges with accommodation, forcing some to perch with their friends outside the barracks.

She said when personnel come to Accra for official duties, such people needed to be accommodated at the barracks “but unfortunately, due to accommodation challenges, they are compelled to go outside and perch with friends.”

“So the GOC in a bid to alleviate this stress that personnel have to go through whenever they come to Accra for official duties, initiated this project,” Major Amarteifio noted.

She said although the government is doing its best to address the accommodation challenges in the various barracks, benevolent individuals could assist in that respect, saying that when a soldier gets a good place to sleep, it enables them to carry out their duties well.

The President of Citizen Eye Ghana (CITEG), a civil society organisation, Alex Kwaku Tetteh, who was at the event commended Brigadier General Abraham Yeboah Nsiah for the project and called on other Ghanaian nationals to emulate his example.