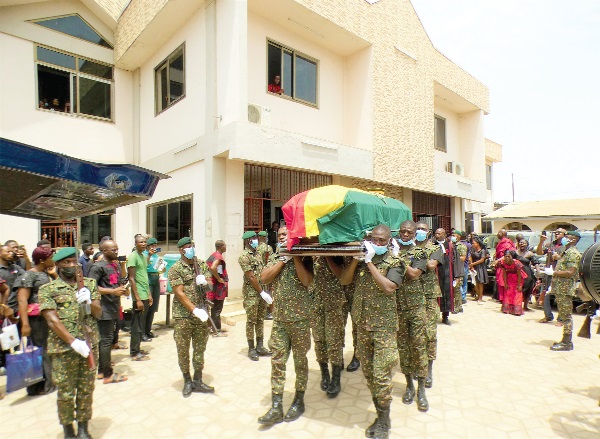 It was a solemn event with various tributes eulogising the fallen officer, who died on Tuesday, March 22 this year, while on night patrol duty on the Ghana-Burkina Faso border.

A lot of personalities, including people from the Office of the Chief of Defence Staff, high-ranking immigration officers, other security agencies, friends and sympathisers all thronged the Bishop Alleyne AME Zion Church for the farewell ceremony.

Many of the mourners, including the immediate family members, were adorned in black attire for the service with the casket containing the remains of Paa, as he was popularly known, ready for filing past by his fellow immigration officers as early as 7 a.m.

The tributes that poured in from family, friends and business associates spoke highly of his character and his work.

His wife, Abigail Fosuwaa Otoo, said he was hardworking and dedicated most of his time when he could, to his family.

She said Otoo was perfect, well trained and endowed with good morals adding that his values shaped her.

“We move together, and to talk of love, you were true a definition of love. Oheneba, you were superb and fantastic.

“When we met, you were already an officer, I supported, respected and never resisted when duty called” she said.

There were similar outpouring of tributes to Mr Otoo from his parents, siblings, the church, the GIS, his senior high school year group and his church choreography group of which he was a dedicated member, all of whom testified to his outstanding character.

Immigration Control Officer, Michael Ekow Otoo, who would have turned 25 last Sunday, was a member of “Operation Conquest Fist “at the Hamile detachment which was for night duty on the Ghana-Burkina Faso border when he met his untimely death on Tuesday, March 22, 2022.

The statement said he was shot dead at Kokoligu, a village between Nandom and Hamile.

"Preliminary investigation revealed that the officer had six gunshots from the rear by his attackers largely suspected to be smugglers," the statement said.

"It was further established that the fallen officer might have had a struggle with his assailants prior to his death. His body was hidden under a bridge while his motorbike and helmet were found some 100 metres away from his remains".

The statement further revealed that his weapon was taken by his assailants.

In an interview, the Public Relations Officer of the GIS, Chief Superintendent Amoako Attah, said a high-powered investigative body made up of the police and other agencies had visited the crime scene at Kokoligu, assessed the scene, interviewed town folks and officers and were yet to submit their final report to the comptroller general.

“But even before that, certain measures and operation protocols have been adopted to ensure this unfortunate incident does not recur”, he added.