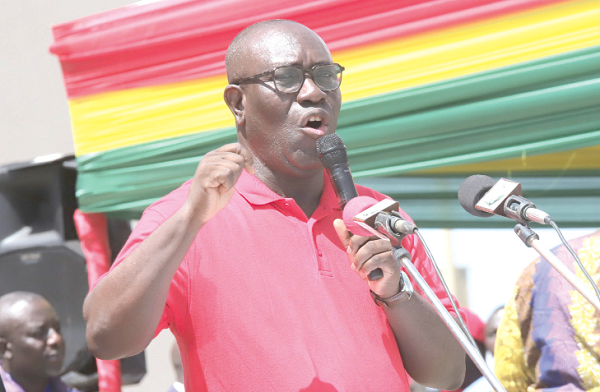 The Secretary-General of the Trades Union Congress (TUC), Dr Anthony Yaw Baah, has said pay differentials in the public service have worsened, despite the implementation of the Single Spine Pay Policy (SSPP) over the past 12 years.

He said the SSPP had rather distorted the salary structure, with some public sector workers on the Single Spine Salary Structure (SSSS) currently receiving very low salaries, which were woefully inadequate for any meaningful life in these difficult times.

“We now have a situation where junior officers in some public service institutions who are not on the SSSS earn much higher salaries than senior officers on the structure,” he complained.

Dr Baah was addressing this year’s May Day celebration in Accra last Sunday.

He cited instances of workers on the SSSS receiving the lowest salaries, compared to their counterparts on other salary structures in the public sector.

The TUC Secretary-General said the highest salary on the SSSS in 2022 was GH¢7,404 per month, with the lowest being GH¢415 per month.

He said for last year and this year when public sector workers on the SSSS were offered four and seven per cent pay increment, respectively, some state-owned enterprises (SOEs) awarded themselves over 25 per cent salary increase, even though their salaries were higher than those for workers on the SSSS.

Dr Baah raised another issue of how some heads of SOEs were earning over three times the salary of the President of the Republic, even though some of these SOEs were making huge losses.

“Why should a chief executive officer managing a loss-making SOE receive over three times the salary of the President of the Republic who is managing the entire country?” he asked.

He expressed the hope that the committee that was reviewing the SSPP would address the key challenges that had hindered the effective implementation of the policy.

Dr Baah explained that the low level of salaries and the pay inequalities had very serious implications for workers and those on retirement.

He added that a large number of pensioners were receiving the minimum pension of just GH¢300 per month, compared to the highest monthly pension of GH¢142,564.

Dr Baah appealed to President Nana Addo Dankwa Akufo-Addo to go to the aid of all retirees on the SSNIT scheme who had been short-changed in their benefits since January 2020 as a result of the implementation of the National Pensions Act, Act 766.

The act establishes the legal framework for a national pension scheme and a national social security scheme, and according to the TUC Scribe, instead of making retirement something to look forward to, retirees had no such joy.

“And, as we all know, there is no income support for the aged in Ghana, despite our enormous wealth,” he added.

That, he explained, meant that 85 per cent of the aged in the country (about 1.6 million old people) had to rely on their families for food, shelter, clothing, social care and health care.

He added that, sadly, those whose families could not support them financially had to beg on the streets of Accra and other cities and towns across the country to survive.

Dr Baah said given the rising cost of living due to the high inflation in the country, organised labour would like to appeal to the President to use his Executive powers to grant a cost-of-living allowance (COLA) of at least 20 per cent.

That, he said, should cover all public service workers, including the Armed Forces, the Police Service, the Prisons Service, the Immigration Service, the Fire Service and all the security and intelligence agencies.

He explained that the COLA must be extended to all workers in the private sector who were earning the minimum wage of GH¢13.53 per day (or GH¢365 per month) and all pensioners on the SSNIT payroll who were receiving the minimum pension of GH¢300 per month.

"The proposed COLA will not only cushion workers and pensioners from the harsh effects of inflation but, even more importantly, also prevent mass poverty among the working people of Ghana who are contributing so much to the development of this country," he explained.

The TUC Secretary General listed a litany of challenges, including inflation, which he said had eroded the incomes and wages of workers.

The TUC Secretary-General, referencing a number of comparisons between Ghana and other countries on wages and salaries and the depreciation of the cedi, called on the government to suspend all taxes and levies on petrol, diesel, liquefied petroleum gas (LPG) and kerosene until the international price of crude oil and the value of the cedi were stabilised.

He said that would bring down the prices of fuel products and ease the burden on the citizenry.

“The 15Gp reduction offered by the government is not enough. Suspending all taxes and levies on fuel products in these challenging times will also demonstrate to Ghanaians that our government really cares and is sensitive to the plight of the good people of Ghana,” Dr Baah said.