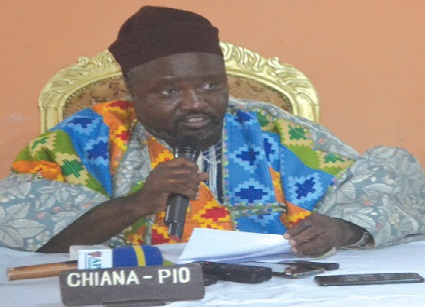 The President of the Upper East Regional House of Chiefs, Pe Dituudini Adiana Ayagitam III, has called on the government to urgently establish a relief fund to provide support to residents affected by the Bawku chieftaincy conflict.

According to him, the renewed chieftaincy conflict had reached crisis level as many residents, families and individuals had lost their source of livelihoods and were currently struggling to survive in the area.

“We call on the government to establish a fund and appeal for donations from institutions and corporate organisations to alleviate the humanitarian crisis currently unfolding in the Bawku area,” he said.

Addressing a press conference on behalf of the house of chiefs in Bolgatanga, Pe Ayagitam, who is also the Paramount Chief of the Chiana Traditional Area, said “for the long term, we encourage the government to consider providing special investment packages to provide jobs for the teeming unemployed youth.

The press conference was held to address pressing issues relating to the renewed Bawku chieftaincy conflict, which has worsened the security situation in the area, as well as deprived many residents of their source of livelihood.

Pe Ayagitam stated that Bawku, the capital of the Kusaug Traditional Area, was home to a number of settler communities including Yanga, Hausa, Bimoba, Bisa, Moshie and Dagomba, besides the Mamprusis and other tribal groups.

He said “all these groups of people desire to live in peace and tranquillity and to go about their legitimate businesses and activities in an atmosphere and environment devoid of tension and insecurity.”

“Therefore, we urge the feuding factions to make a joint statement on the current situation in Bawku and embrace peace since it is the only means through which peoples’ lives can return to normalcy,” he said.

He advised politicians to stay clear of the Bawku conflict, saying “politicians are advised to stop parading in political regalia causing havoc with great impunity.”

He added, “The conflict in Bawku, in our view, needs to be dealt with seriously with utmost expediency devoid of political interferences.

“As a house, we urge the police to expedite their investigations and bring whoever is guilty of breaches of the law to speedy prosecution, especially some unidentified youth currently on the police wanted list for various criminal acts in the Bawku area.”

Pe Ayagitam stressed, “our worry as chiefs is the fact that Bawku is a border town sharing borders with Burkina Faso and Togo, making it vulnerable to foreign terrorists, jihadists and other criminals. We need lasting peace in the area as continuous insecurity in Bawku would negatively affect the region and the nation as a whole.”

Bawku has been the hotbed of a decades-old ethnic conflict between the Mamprusis and Kusasis and has claimed several lives over the period.

The fight was ignited last Christmas, leading to the death of many people including a female police constable.

Recently, it came to light that the Municipal Directorate of Education had granted the release of about 100 basic school teachers in the Bawku Municipality due to the volatile security situation in the area.