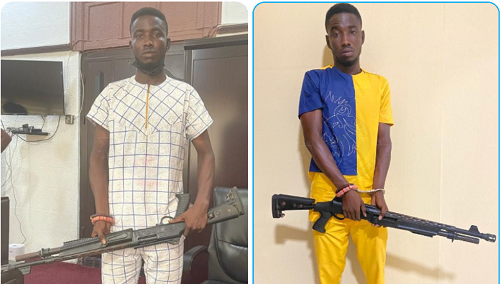 A man who was arrested by the Police Intelligence Directorate on Monday (November 22, 2021) for brandishing a weapon with threats on social media will be put before a court today.

The suspect, Nii Ponponsuo, was busted after he was seen in video loading a pump-action gun with cartridges and making threatening utterances.

"The Police after reviewing the video conducted a special exercise that led to the suspect’s arrest from his hideout," the Police said in a statement.

A search conducted led to the retrieval of one 12 bore SB pump-action gun. Currently, he is assisting the Police investigation.

"The Police Administration would like to continue to caution the general public, especially, individuals who have a penchant for the display of weapons and issuing threats to desist from such unlawful acts. Anyone arrested will be dealt with according to law," the statement added.