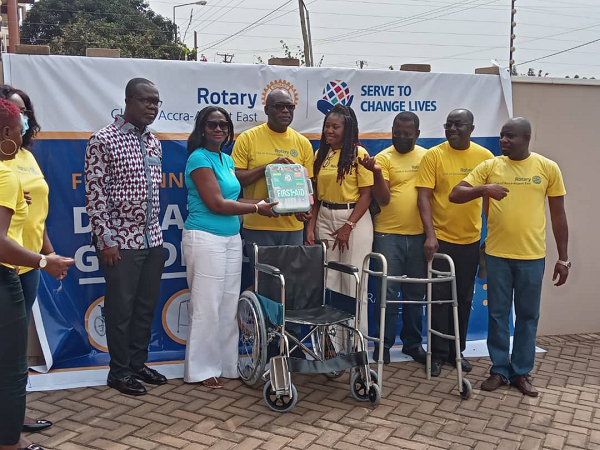 The President of the Rotary Club of Accra-Airport East, Mr Kwabena Barning presenting one of the items to the Executive Director of the Foundation, Madam Vivienne Gadzekpo Duker with other members of the club looking on Follow @Graphicgh

As part of activities to mark its one-year anniversary, the Rotary Club of Accra-Airport East on Saturday presented some items to the Golden Chapter Foundation, a not-for-profit organisation, with focus on helping to address inactivity, loneliness and social isolation challenges faced by elderly people in society.

The President of the Rotary Club of Accra-Airport East, Mr Kwabena Barning said the gesture was to help address some of the immediate challenges of the Foundation.

For him, the ramp fabrications, for instance, would help improve the accessibility of the place by some of the elderly people who used wheelchairs.

He expressed the hope that the club would continue to help address some of the challenges in the Ghanaian society.

“This (gesture) is not going to be the last going forward,” he said, commending the members of the club for their continued commitment and support towards the various projects the club had undertaken since its creation.

For Mr Barning, Rotary as a club had always been noted for its support towards healthcare, education, and peace building initiatives, and that the club would continue to assist institutions of critical importance such as the Golden Chapter Foundation with such assistance.

Speaking at the event, an Assistant Governor of the Airport East Rotary District 9102, Mr William Ofori, said the gesture was to demonstrate that Rotary was all about making impact in society. 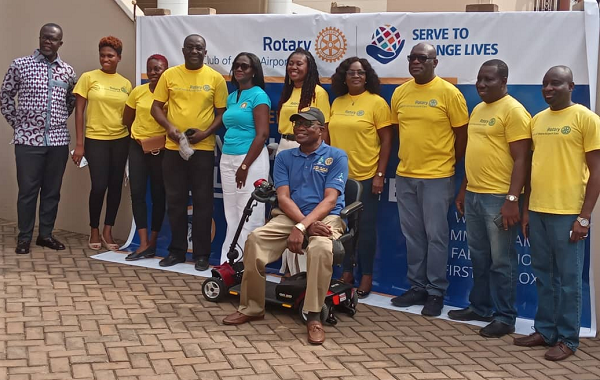 He said the club since its inception had embarked on several impactful projects, donating to many facilities, including the LEKMA hospital in Accra.

He has, therefore, commended the managers of the facility for thinking about the elderly in society, pledging that the Rotary Club of Accra-Airport East would continue to deepen its collaboration with the Foundation.

For him, helping to address some of the immediate needs of the Golden Chapter Foundation would go a long way to help address the many challenges faced by the elderly people who visited the facility.

The Golden Chapter Foundation is a not-for-profit organisation established in February 2018 to help address inactivity, loneliness and social isolation challenges faced by older people in Ghana, through the provision of a communal environment, in the form of day centres where the elderly can meet, interact and live fulfilled lives and also by advocating for the mainstreaming of issues concerning the aged in national discourse.

The Foundation seeks to provide safe, peaceful and lively spaces during the day, for senior aged 60 years and above to socialise, develop new and polish up old skills that will enable them to undertake activities of interest, reduce their boredom and improve their physical and mental well-being.

The Executive Director of the Foundation, Madam Vivienne Gadzekpo Duker, commended the Rotary Club of Accra-Airport East for the gesture, saying it would really help the Foundation in its daily activities.

She said the Foundation offered a well-structured activities designed by professionals and which were appropriate for the physical and mental abilities of the elderly who visited the facility for their health and well-being.