Smart, enthusiastic parades in the regions 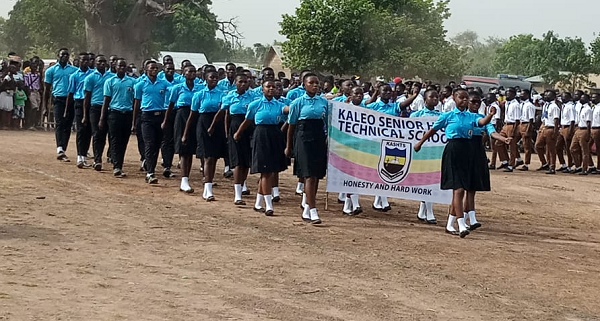 The march past and parade to commemorate the nation’s 65th Independence anniversary was replicated at the regional level despite the national event being held at the Central Regional capital, Cape Coast, yesterday.

For the regional events, it was a day reserved for the schoolchildren as they showed up smartly dressed in their uniforms to be participate after which the best performing schools were awarded.

From Ho, the Volta Regional capital, Alberto Mario Noretti reports that this year’s Independence Day celebration at the Ho Jubilee Park took place on a highly emotional note as it was held purposely in remembrance of young Etornam Gorni Attipoe, who collapsed during a rehearsal of the same event at the same venue 10 years ago.

The pupil of the SDA Basic School, Ho, was marching with her colleagues when she collapsed metres away from the dais and was rushed to the hospital where she was pronounced dead.

It was a moment of uncontrollable tears for the family of the deceased when Regional Minister, Dr Archibald Yao Letsa, and the Regional Director of Education, Madam Afi Enyonam Amafuga, presented a citation in honour of the girl to her parents at the parade ground.

The citation read in part: “You were hoping to march and bring honour to your school and the country at large.

“Unfortunately, that dream was cut short after you fell on the square where you were hoping to salute the National Flag.

“You were by far the youngest to die in line of duty and the price you paid has greatly changed how Independence Day Parades are organised in Ghana today.

“As a result, your colleague students are given special attention on this special day.

“With your hands on chest and lifted high to heaven, we raise our voices to echo your name.”

The regional minister later cut the sod for the construction of a monument in honour of the late Etornam Gorni Attipoe.

Contingents from selected basic and senior high schools as well as the various security agencies and the cadet corps of six SHS in the municipality took part in the parade.

In an address after the parade, Dr Letsa entreated Ghanaians to put Ghana first in all their undertakings, and demonstrate the spirit of loyalty, honesty commitment, dedication, transparency, accountability and love for the nation and fellow countrymen and women at all times.

The Ghana Red Cross Society first aid post erected at the park recorded about 30 casualties, including personnel of the security agencies and members of the public.

The parade was commanded by Captain Andrew Opoku Addai of the Ghana Armed Forces and inspected by the Bono Regional Minister Justina Owusu-Banahene.

At the end of the parade, the Twene Amanfo Senior High and Technical School was adjudged the winner at the SHS level, while the Ridge “A” Experimental JHS won the JHS competition and the Ridge “C” Experimental Primary School winning the primary schools contest.

In her remarks, Mrs Owusu-Banahene, challenged the public to let the 65th anniversary be a turning point for the unity of the country.

She urged the public to support the government by contributing their quota to the growth of the economy.

More than 16 persons, mainly security personnel, collapsed during the parade which was held at the Sunyani Jubilee Park.

From Navrongo where the Upper East Regional parade took place, Gilbert Mawuli Agbey reports that a delegation from Burkina Faso and Togo which share borders with the region, as well as the general public graced the event held at the Centre of Sports Park.

Taking the salute during the march past was the Regional Minister, Mr Stephen Yakubu.

Speaking at the ceremony, the Upper East Regional Director of the Ghana Education Service, Mr Edward Azure, called for collective efforts from all relevant stakeholders towards overcoming the challenges facing the education sector.

He appealed to the chiefs and elders of Bawku, Doba and Kandiga communities to, as a matter of urgency, mend their differences and let peace reign, saying " the volatile security situation in such areas had led to low turn out for school pupils and teachers for fear of being attacked by feuding factions ".

Mr Yakubu called on Ghanaians to imbibe in themselves values such as honesty, tolerance, peace and harmony to enable them to contribute to the socio-economic development of the country.

He stressed: " a digression from these core African values will place the country in jeopardy ".

He said that our bigger challenge, as a people, was poverty which had been further worsened by large-scale indiscipline in all sections of our society.

"After 65 years of independence, it is incumbent on all Ghanaians to distance themselves from ideas, attitudes and practices that will undo the progress that we have made over the years’’, he said.

From Tamale, the Northern Regional capital, Mohammed Fugu reports that the Independence Day parade was interspersed with acrobatic and beautiful cultural display under the command of Squadron Leader Eugene Owusu Nyame.

About 500 students and pupils enthusiastically participated in the parade after which the Kamina barracks Primary School, the Police Barracks Junior High School and the Ghanasco Senior High School emerged winners in their respective categories.

The Northern Regional Minister, Alhaji Saani Alhassan Shaibu, who graced the occasion, called on Ghanaians to support the government to develop the nation.

He noted that development was a shared responsibility, hence the need for every citizen to show commitment to the forward march of the country .