Roads being fixed since 2017 — Minister 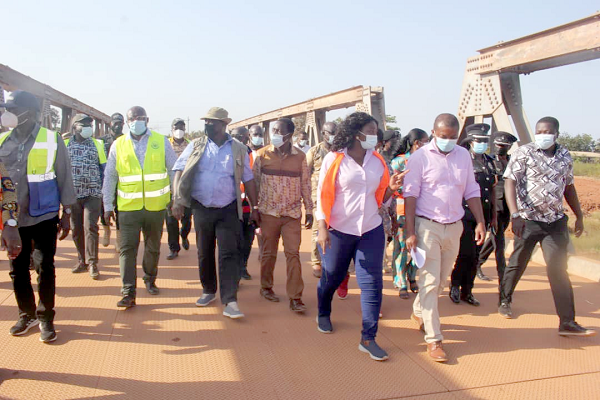 Mr Kwesi Amoako-Atta (2nd left), the Minister of Roads and Highways, being conducted around at one of the project sites
30.5k Shares

The Minister of Roads and Highways, Mr Kwesi Amoako-Atta, has said that the call on the government to fix roads in the country are belated, maintaining that the fixing of roads in Ghana started as far back as 2017.

“Those who are calling on us specifically to fix the roads are to be updated, and they must be reminded that they are late. We started fixing the roads from January 2017, and a lot has been done. So, we have gone far, they are behind. They should run to catch up with us because we're miles and miles apart,” he said.

The minister indicated that President Nana Addo Dankwa Akufo-Addo reached “unprecedented” limits with regard to roads development in the country in his first term.

“Roads are being tackled everywhere — highways, feeder and urban roads [and] asphalt overlays. Within the first term of Akufo-Addo's administration, 1,200 kilometres (km) of asphalt overlays were completed across the nation. It has never happened in the history of this country. Right from January 7, 2017, he (the President) started fixing the roads,” he stressed.

The minister said this when he led a delegation on a tour to inspect ongoing dualisation projects at the Buduburam and Mankessim sections of the Accra–Cape Coast Highway in the Central Region.

The projects are part of a nationwide agenda to address road issues and their attendant accidents and related fatalities, and to decongest traffic on those parts of the stretch.

The minister and his team first visited the Budumburam project where preparatory works had already begun to make way for the 11-km project, stretching from Sapato Junction to Akoti.

He later inspected the construction of a bypass from Akwakrom Junction to Mankessim, meant to ease the traffic situation in the main Mankessim township, while the dualisation projects proceeded in the long run.

The 20-km bypass, which has been broken into three different components — nine, six and five kilometres — under three separate contractors, is expected to be completed within the next 18 months.

He also visited a 105-metre steel bridge project over River Okyi at Saprudo-Amissah in Mankessim.

Mr Amoako-Atta was in the company of the Central Regional Minister, Ms Justina Marigold Assan, the Member of Parliament for Gomoa East, Mr Desmond Degraft Paitoo, as well as an entourage from the Ministry of Roads and Highways, Feeder Roads and Urban Roads.

The minister admonished engineers in charge of the projects to work with speed “under emergency basis” to remove the congestion from the road, describing the traffic situation as “unacceptable”.

He, however, warned that “quality and efficiency” should not be sacrificed in spite of the speed, stressing that he would not tolerate “any wishy-washy treatment”.

Mr Amoako Atta further indicated that the four-tier Pokuase Interchange was expected to be inaugurated and fully opened to traffic in the first week of July, this year.

He said the project, which was about 98 per cent complete, would see full completion by the end of June, 2021.