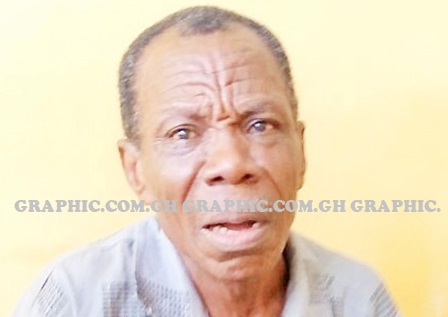 Seth Kwadwo Dese, 69, a retiree and father of eight, has been jailed for three years for sleeping with his underage daughter for two years.

The retired teacher, after abusing the minor, persistently also threw her out of the house when she started resisting his sexual demands.

Dese pleaded not guilty to indecent assault and incest but the Ho Circuit Court yesterday found him guilty and convicted him.

According to the prosecution, Dese, in his caution statement, admitted performing only oral sex acts on the girl and that the sordid acts were meant to encourage her to become the only graduate among her sisters.

The prosecutor, Chief Inspector Clever Ayayee, told the court, presided over by Mr Felix Datsomor, that the victim, now 17, initially lived with her mother at Agortime Kpetoe but moved to live with her father in Ho in 2019.

According to the prosecution, the girl initially slept on a floor mat in the single room she shared with her father.

After some time, Dese convinced his 17-year-old daughter to join him in bed at night and from then onwards had sex with her often.

The convict also warned her never to disclose their affair to anyone, the prosecutor told the court.

Other times, the prosecution stated, Dese, who is a person living with disability, fondled the girl’s breasts and also inserted his fingers into her private part.

With time, Chief Inspector Ayayee said the girl began resisting her father's sexual advances and that angered Dese who ordered her to pack out of the room.

Subsequently, the victim reported the matter to the Domestic Violence and Victim Support Unit (DOVVSU), leading to the arrest of Dese.

In handing down the sentence, Mr Datsomor said the court took into account Dese’s frail condition and that he had no such previous record.