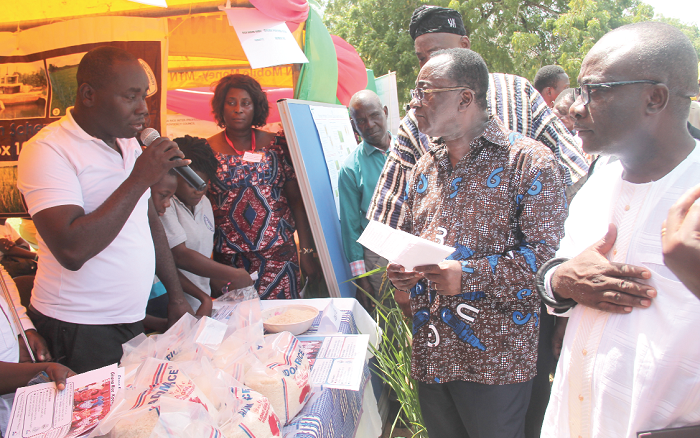 The Republic of Korea has offered Ghana $9 million to develop a rice industry in the Central Region.

The choice of the region for the project followed a recommendation by some Korean rice experts that it had the potential to produce enough rice to feed the country and also for export.

The Minister of Food and Agriculture, Dr Owusu Afriyie Akoto, who made this known when he opened the fourth Ghana National Rice Festival in Accra yesterday, said the experts had assessed the rice production potential in all the 10 regions of Ghana.

According to the minister, the experts established that even though all the regions had the potential to produce rice on a large scale, the Central Region was more endowed.

The minister said the statistics implied that pressure was not only being put on the nation’s trade balance but also made the country vulnerable to global price increases and supply shortages in the rice market.

Dr Akoto said in the past few months, innovative efforts had been made to transform the entire agricultural sector into a vibrant and high-yielding sector to save the country from unnecessary importation and huge import bills.

He explained that the overall objective of the “Planting for Food and Jobs” by the government was to provide enough food to ensure “food and nutrition security in the country.”

According to him, about 750,000 jobs in both direct and indirect employment would be created during the first year of its implementation.

The President of Ghana Rice Inter-Professional Body (GRIB), Mr Imoro Amoro, appealed to the government to support the body to expand and establish Ghana Rice Business Centres to help create more employment in the country.

He said the Ghana National Rice Festival had come to stay to help create awareness and promote local rice brands to create jobs, food security and wealth in the country.

“I also urge the companies importing rice into the country to come and invest in Ghana rice production to promote industrialisation in the country,” the president added.

For her part, the Policy Advisor of the John Agyekum Kufuor Foundation, Nana Ama Oppong-Duah, said the festival would encourage rice farmers to work hard and produce sufficient rice for both the local and international markets, adding that, it would also help promote sustainable food systems in Africa.

“I would, therefore, encourage value chain members to include nutritious crops in their farming systems to ensure not only self-sufficiency in rice but also the production of nutritious food,” she stated.