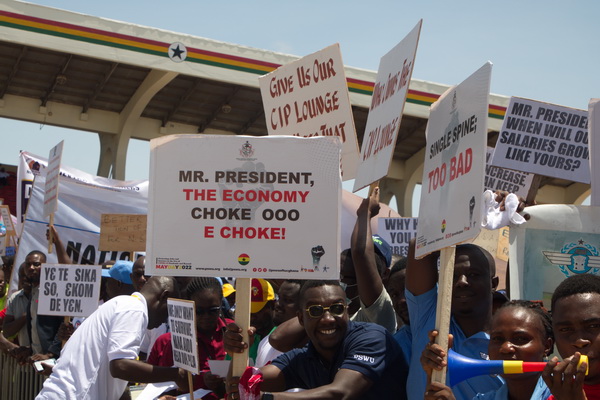 A section of workers at the 2022 national May Day celebrations at the Black Star Square in Accra
30.5k Shares

Public Services Workers have declared they will embark on an indefinite strike come Tuesday, July 19, 2022 to demand improvement in their emoluments and resolution of outstanding issues bordering on workers compensation.

According to the Public Services Workers Union, with the frequent price increases and a constant erosion of the real value of the relatively low wages of public sector workers, resulting from an 18-year high inflation rate of 27.6 per cent, coupled with a number of outstanding issues, its members are left with no choice than to embark on the strike action until their concerns are addressed.

The decision comes in the wake of increasing worker agitations and or threats to strike over demands for a cost of living allowance.

A statement issued by PSWU says the decision to strike was taken at an Emergency Meeting of its Management Committee and representatives from the over 65 institutions that make up the union. 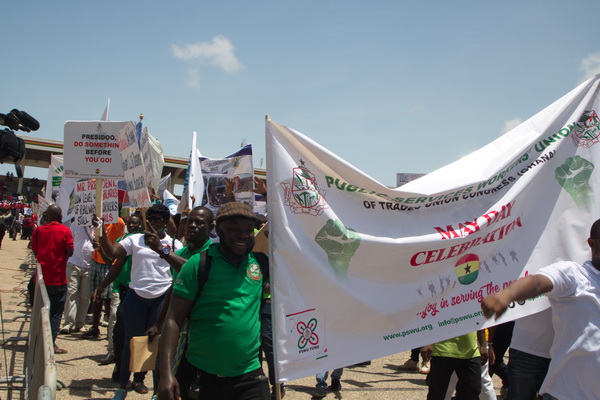 Read also: All that Organised Labour told Government at May Day (Full statement)

“It could also be recalled, that as patriotic citizens and social partners in the development of Mother Ghana, organized Labour groups, including the PSWU took the hard decision, to the chagrin of members, to accept a 4% and 7% salary increment respectively for 2021 and 2022. However, considering unfolding events such as relatively high salary increases for 'Article 71' and related office holders and Government expenditure patterns, we are worried that the sacrifices made by Organized Labour during the last negotiations has been taken for granted. This situation is further worsened by the refusal of Government to grant mandate for the negotiation of institution-specific conditions of service for a number of organizations under the Single Spine, and sometimes its resort to delay tactics during negotiations.

“The over 27,000 workers within the over 65 public sector institutions that make up the PSWU feel the economic crunch in their pockets, with each passing day resulting in uncertainties of meeting basic needs. Obviously, a possible return to the IMF further complicates the economic uncertainties faced by public sector workers and flashes back memories of harsh labour policies that disadvantage the ordinary worker.

“Noticeably, a decision to enter into an IMF programme risk a return to a harsh industrial atmosphere rife of conditionalities such as sale of critical and well performing national assets, redundancies, freeze on employment, freeze in wages (an intention denied by His Excellency the President during his Remarks at the 11th Quadrennial Delegates Conference of the TUC (Ghana) in Kumasi on 23rd March, 2021).

“Further, for a number of workers who retired under the National Pensions (Amendment) Act, 2014 (Act 883) which came into full force on 1st January, 2020, the disparity in their lump sum payments as compared to those who retired under PNDCL 247 have not been resolved. This has led to the already vulnerable members of our society, the aged, going through further economic hardships despite the firm assurances of the President to resolve this matter as far back as 13th October, 2020 in the heat of the Elections Campaign.

“Consequently, at an Emergency Meeting of the Management Committee and representatives from the over 65 institutions that make up the PSWU, our members were left with no choice than to embark on a Strike Action effective Tues. 19th July, 2022 until our concerns are addressed.”