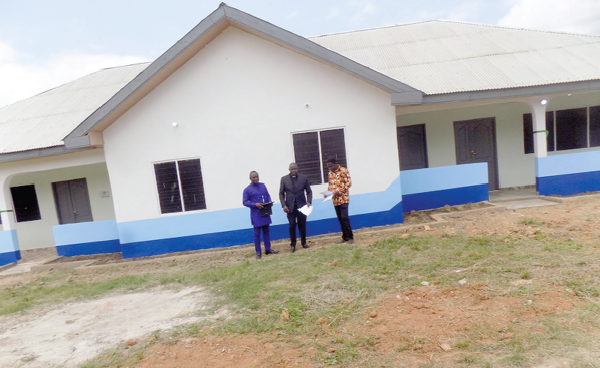 The Parent-Teacher Association (PTA) of Akyem Swedru Senior High School (AKISSS) has constructed a semi-detached masters’ bungalow at GH¢127,000 for the school.

The facility for two teaching staff members was financed through voluntary contributions by members of the association to provide residential accommodation for the staff.

The Chairman of the PTA, Adu Agyei, inaugurated the facility at a ceremony at Akyem Swedru, and said the association was constructing four more semi-detached bungalows capable of accommodating eight more tutors.

The facilities under construction, he said, had been roofed and would be completed next year.

At the ceremony, the Vice-Chairman of the PTA, Rev. Maxwell Owusu-Renner, noted with concern that less than 20 tutors out of the over 50 teaching staff of the school were resident on campus due to the lack of residential accommodation.

He said the situation made it difficult for them to cater for the about 2,500 students.

Rev. Owusu-Renner said the PTA was working around the clock to complete the remaining staff accommodation facilities so that more teachers would be accommodated on campus to supervise the boarding students.

He said steps were also being taken for the PTA to purchase a salon car for the school’s administrative operations.

He appealed to PTA members to pay their special levies to facilitate the completion to the staff bungalows currently under construction.

Rev. Owusu-Renner appealed to the government to lift the ban on the collection of PTA dues to supplement the government’s efforts in the development of senior high schools.

The Treasurer of the PTA, Paul Gadargbui, advised the students to be disciplined and to also study hard in order to achieve their aim at the school.

The Headmaster of the school, Eric Afari Agyapong, expressed gratitude to the PTA for its contribution towards the development of the school.

He, however, appealed to the association to help complete the other four staff bungalows in time.

Mr Agyapong praised the government and the Member of Parliament for Akyem Swedru, Kennedy Osei Nyarko, for tarring the roads and streets in the school.