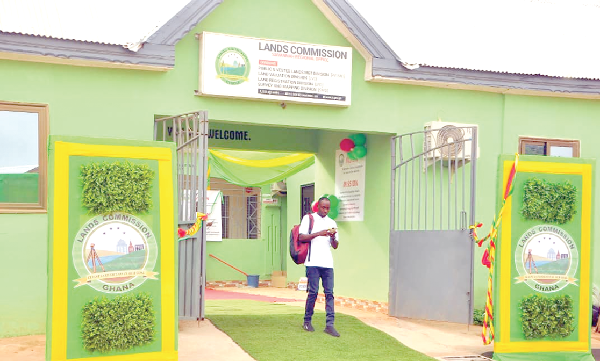 The Lands Commission has opened offices in all the six newly created regions in the country to facilitate land administration.

The move is in line with Article 258 and 260 (1) of the 1992 Constitution which mandates the creation of regional offices of the commission across the country.

The Chairman of the commission, Alex Quaynor, inaugurated the last of the offices in the Savanna Region.

He said the construction of the offices was significant in facilitating land administration for national development.

"What is unique about the establishment of these offices is that they will operate in a fully digital environment to reduce the usual delays associated with processing of documents manually," the chairman added.

He said staff would also advise the government, local and traditional authorities on the policy framework in the development of the regions and the entire nation.

According to him, land was a strategic asset which formed the basis of every development activity in the country.

Mr Quaynor further urged officials of the commission to be diligent in the delivery of services such as survey and mapping, valuation of property, rating of state land acquisition, land management and registration since such services could help propel the socio-economic growth of the country.

He, however, cautioned them against illegal land administration practices such as double sale of land and disloyalty in land transactions.

"Ineffective land administration scares investors and deprives communities of the needed development. Unfortunately, this situation is very prevalent, and it is worrying," the chairman said.

He said the new Land Act also mandated traditional authorities and families who owned lands to set up a customary land secretariat for proper documentation and also work closely with the commission and the Office of the Administrator of Stool Lands for technical advice.

The Savannah Regional Minister, Saeed Muhazu Jibril, thanked the government for the creation of the region, saying the establishment of the office would curb long distance travels to access services.

He urged staff of the commission to rise above teething challenges in the discharge of their duties, adding "every new beginning is difficult, but someone has to sacrifice for others".

The Deputy Executive Secretary of the Lands Commission in charge of Operations, Benjamin Arthur, also asked the staff to embrace the digitisation drive to "do a better job".